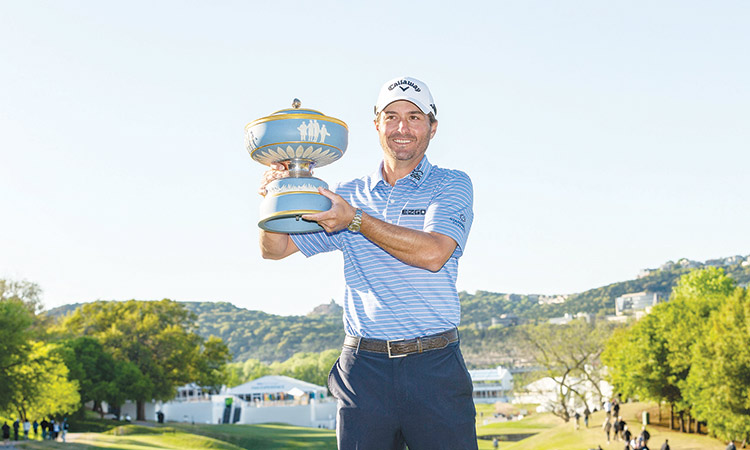 Kevin Kisner poses with the trophy after winning the final round of the WGC Match Play Championship at Austin Country Club in Austin on Sunday. Reuters

On a cold and windy last day of the 64-player showdown at Austin (Texas) Country Club, Kisner dominated 2013 winner Kuchar in the all-American final to capture the $1.745 million (1.55 million euros) top prize.

“It was grueling and the winds were tough,” Kisner said. “It was a hard week but I prevailed and I’m world Golf champion.”

Kisner, last year’s WGC Match Play runner-up to Bubba Watson, was 48th seed but became the lowest-seeded winner since Australian Geoff Ogilvy in 2006 after taking a key lesson from his 2018 defeat.

“I learned not to get too amped up for that final,” Kisner said.

At 40, Kuchar would have been the oldest champion in tournament history and the first player to win three titles in a PGA season since Steve Stricker in 2009.

Kisner, 35, sank an 11-foot birdie putt to win the first hole but his bogey to drop the par-4 fifth squared the final.

After blasting his approach way left of the green at the par-5 sixth, Kisner punched his third to four feet and sank the putt to win the hole and restore his 1-up advantage. Kuchar 3-putted from 50 feet for bogey to lose the par-3 seventh but Kisner missed a 5-footer for par at the ninth, trimming his lead to 1-up at the turn.

Kuchar, the 2016 Rio Olympic bronze medalist, found water off the tee to drop the par-3 11th and fall 2-down then made his first birdie of the final but only halved the par-5 12th.

In the consolation match, Molinari defeated Bjerregaard 4&2, denying the Dane who ousted Tiger Woods in the quarter-finals a special temporary US PGA membership with the victory.

Molinari, the reigning British Open champion, was Europe’s hero in last year’s Ryder Cup, winning all five matches in a victory over the US team, and was 5-0 here before Sunday.

Both semi-finals were all square after 10 holes, no one enjoying more than a 1-up edge on the front nine. Kisner birdied the par-5 12th and par-4 14th to go 2-up, but Molinari answered with a tap-in birdie to win the par-5 16th and then sank a 4-foot birdie putt at the par-3 17th to level the match.

At 18, Kisner found a fairway divot but landed his approach 14 feet from the cup and got down in two while Molinari escaped a bunker to 26 feet, rolled his birdie putt seven feet past the cup and missed the par putt to hand Kisner the victory.

Kuchar won 12 but Bjerregaard sank a 23-foot birdie putt at the par-4 15th to square the match again.