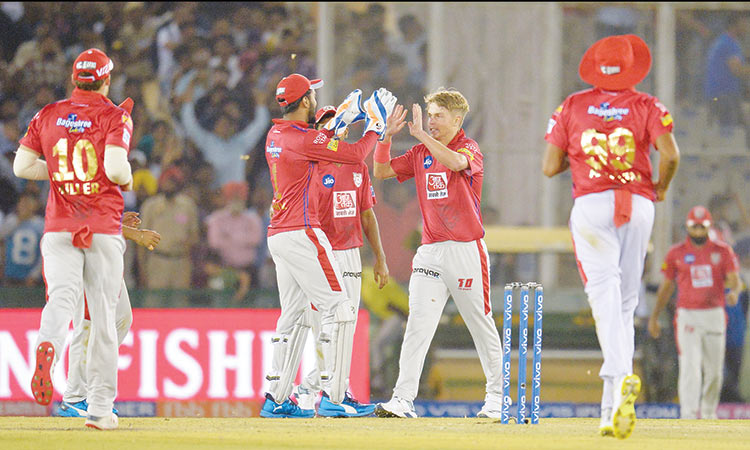 Mohali: Hosts Kings XI Punjab (KXIP) won their second match on the trot at home, when they beat Delhi Capitals (DC) by 14

runs in their Indian Premier League (IPL) match at Mohali on Monday.

With this win, KXIP jump to second place on the IPL table.

Earlier, despite losing the wicket of opener Prithvi Shaw in the very first ball of the match, caught behind by KL Rahul off the bowling of skipper Ravichandran Ashwin for a duck, DC had healthy contributions by Shikhar Dhawan who hit a 25-ball 30 with the help of 4 fours and captain Shreyas Iyer who scored 28 off 22 deliveries with five hits to the fence, which put them back on track in their run chase.

The next two batsmen Rishabh Pant and Colin Ingram then went about consolidating the team’s position, putting on a 62-run partnership. However, the fall of Pant’s wicket, clean bowled by Mohammed Shami in the fourth ball of the 16th over, when the batsman had scored 39 off 26 balls (3x4, 2x6), followed by Chris Morris’ run-out effected by Ashwin in the very next ball, without any addition to the score, brought KXIP right back into the match.

DC were to suffer another huge jolt in the 17th over, when Ingram who had scored 38 off 29 deliveries, striking 4 boundaries and 1 six, was claimed by Sam Curran who had the batsman caught by substitute Nair. The next batsman, Harshal Patel lasted just 2 balls before being caught behind off the bowling of Curran for a duck. DC were then precariously placed at 148/7, still needing 19 runs to win the match.

Hanuma Vihar, bowled by Shami and Rabada, cleaned up by Curran, then departed in quick succession.

Earlier, David Miller missed a half-century as KXIP were restricted to 166/9 by DC.

Put into bat, Miller (43; 30b, 4x4; 6x2) looked good during his stay at the crease but lost his wicket at a crucial juncture with the Punjab scoreboard reading 137/5 in 16.2 overs. From there on, the hosts could only manage 29 runs more with Mandeep Singh’s unbeaten 21-ball cameo of 29 helping them to go past the 160-run mark.

Mandeep hit a four and a six in the last two balls off Kagiso Rabada (2/32) who was excellent otherwise.

Sarfaraz Khan (39; 29b, 4x6) gave Miller good company as the pair stitched together 62 runs for the fourth wicket.

Besides Rabada, Chris Morris (3/30) was simply fantastic, bowling a probing line along with Sandeep Lamichhane (2/27) who kept it tight at the start.

Punjab lost KL Rahul (15) early. After hitting two fours and a six, the World Cup hopeful flattered to deceive by getting trapped in front off Morris, a decision the right-hander chose to review unsuccessfully.