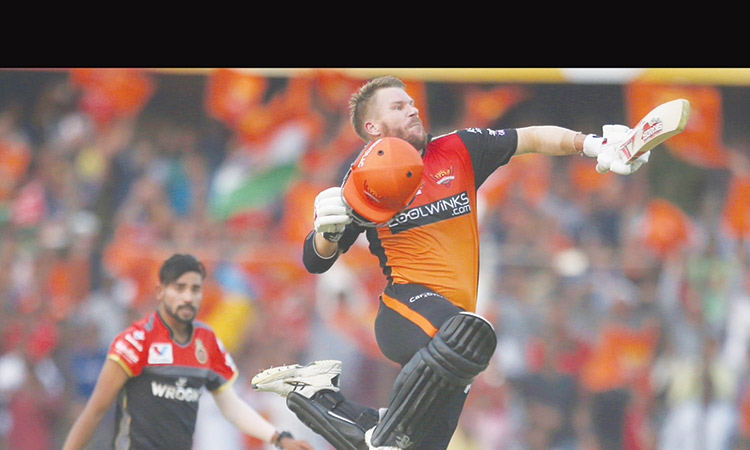 SRH’s David Warner celebrates after scoring a century against RCB during their IPL match on Sunday. Associated Press

RCB skipper Virat Kohli’s decision to field first backfired as Sunrisers -- sans regular captain Kane Williamson -- were on fifth gear from ball one thanks to Bairstow (114; 56b; 12x4; 7x6) and Warner (100 off 55 balls not out; 5x4; 5x6) as the duo recorded the highest IPL-opening wicket partnership of 185 runs.

Previously, Kolkata Knight Riders’ Gautam Gambhir and Chris Lynn held the record with a 184-run partnership against Gujarat Lions in the 2017 edition.

Colin de Grandhomme was their top-scorer with a 32-ball 37.

For the hosts, Mohammed Nabi returned best figures of 4/11.

Coming back to Bairstow-Warner, this was also their third successive hundred-run stand this season, a first in IPL history.

Bairstow, notching up his maiden IPL ton, was the aggressor as the England stumper-batsman did not spare any of the visiting bowlers.

Warner, for a change, played second fiddle but once Bairstow was out, upped the ante in his trademark fashion to bring up his fourth IPL hundred as the home team never let their rivals get a grip of things.

The fact that there were only 24 dot balls in the entire innings painted the picture.

The pair raced to 59/0 in six overs with Bairstow and Warner going all guns blazing.

Prayas Ray Barman, who became the youngest plyer at 16 years and 157 days in the tournament, was given his first over and the Bengal leggie conceded just six runs.

But in his next three, the teenager saw Bairstow bring up his first IPL hundred off 52 deliveries in the 16th over and hit him to every corner of the ground as he finished with figures of 0/56. Bairstow skipped up in the air, punched his fists in celebration and took his helmet off as the packed house rose in adulation of a masterly innings, pedal to the metal from ball one.