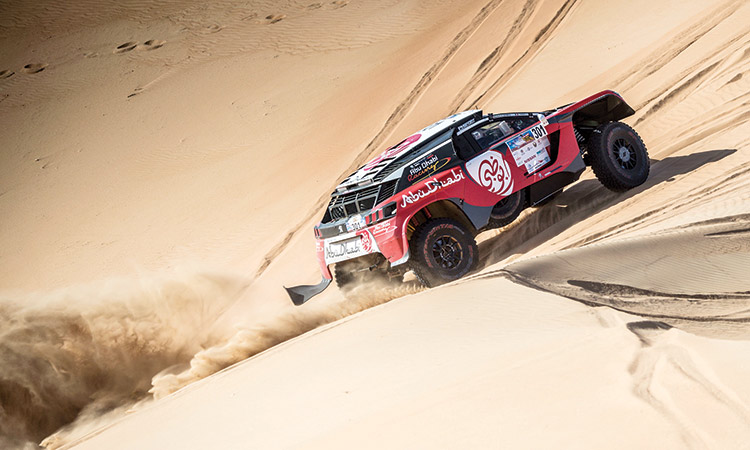 The UAE’s Khalid Al Qassimi knows what it is like to win the Abu Dhabi Desert Challenge, having done so in 2017. Supplied photo

Abu Dhabi: The UAE’s Khalid Al Qassimi and Saudi Arabia’s Yazeed Al Rajhi will be battling the odds, and event history, when they each set off in pursuit of victory on Sunday morning in the Abu Dhabi Desert Challenge powered by Nissan.

After Saturday’s ceremonial start at Yas Marina Circuit, the rally begins in earnest with the 261.97km first of five desert stages running through the dunes and sabka plains of the Al Dafrah Region in a route totalling 2,006.73km in length.

Qassimi, partnered by Frenchman Xavier Panseri in an Abu Dhabi Racing Peugeot 3008 DKR, knows what it is like to win the event, having done so in 2017 as his focus switched from WRC to cross country rallying.

It had been 25 years since another Emirati, Mohammed Mattar, secured victory in the Desert Challenge which has seen Arab drivers find success only six times in its 28 previous editions. While Ahmed Al Shegawi won the T2 production cars category last year, Rajhi is attempting to become the first outright Saudi winner, helped by German co-driver Dirk Von Zitzewitz in a Toyota Hilux Overdrive.

In sharp contrast, Stéphane Peterhansel and Cyril Despres have winning odds much more in their favour in an event which has brought 15 cars triumphs over the years for French drivers.

Accompanied by wife Andrea in a Mini John Cooper Works buggy, Peterhansel is responsible for five of those victories, plus one in the bikes category where Despres notched the other five by French riders before also switching from two wheels to four.

Looking to impress again in the company of the sport’s top riders is the UAE’s reigning FIM world champion Mohammed Al Balooshi who returns to action in the Desert Challenge looking for a top finish after engine failure prevented him from starting the recent Dubai International Baja.