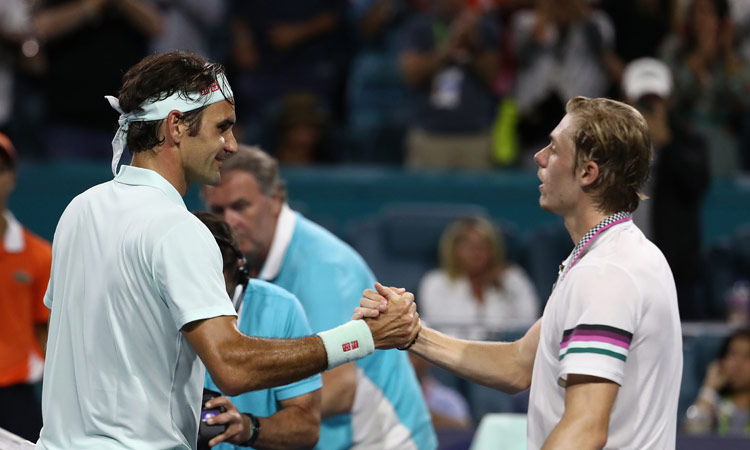 Roger Federer shakes hands with Denis Shapovalov after beating the Canadian teenager in the semi-finals of the ATP and WTA Miami Open. AFP

MIAMI: Roger Federer is gearing up for a Miami Open final shootout with John Isner on Sunday after blowing away young-gun Denis Shapovalov in straight sets.

Federer produced a 6-2, 6-4 masterclass at Hard Rock Stadium to leave up-and-coming star Shapovalov, who grew up idolizing the Swiss, chasing shadows during a difficult first set.

The Swiss was superb in dismantling the 19 year-old’s game, but knows with huge serving Isner lying in wait in what will be the former world number one’s 50th ATP Masters final, the key will be to defuse the reigning Miami Open champion’s monster service game.

Isner used it to great effect in his 7-6 (7/3), 7-6 (7/4) win over Shapovalov’s friend and compatriot Felix Auger-Aliassime earlier in the day, smashing down 21 aces. He’ll be looking for more of the same against 20 time Grand Slam champion Federer.

“Playing a big server like John is like being in a penalty shootout in soccer, but I enjoy it,” said number four seed Federer who coped brilliantly with Kevin Anderson’s dangerous serve in the quarter-finals, winning the first set to love.

“You just hope that the stars align, that you pick the right side, that he picks the wrong side, that maybe he misses a serve, that you can put him in uncomfortable situations time and time again, and at the end somehow you find a way.”

Federer had no such challenge from Shapovalov, playing his fifth ATP Tour semi-final. Even though the Swiss was standing in his way of a first final, the 19 year-old stressed beforehand that it was a “dream” to take on Federer.

It quickly, however, turned into a nightmare.

The Canadian displayed understandable nerves early on, a struggle with his first serve proving as much in a 10 minute opening game which he eventually won.

Yet it didn’t settle him down and when another horribly loose backhand flew long, Federer pocketed a vital early break and stayed in the driver’s seat.

Shapovalov, who will jump to a career best 20th in the world thanks to this impressive run, enjoyed some much better moments in the second set and looked more relaxed, although the match was never in his hands.

He hit just eight winners in response to Federer’s 30 but will learn from this.

“It’s kind of surreal, being on the court against Roger,”admitted the Canadian who joked the only enjoyable moment for him was the warm up.

“Obviously I wasn’t trying to focus on the fact that it’s him on the other side.

“I was just trying to play as good as I can, but he played an excellent match. I wasn’t able stay at his level. I’m just going to try to learn from this and move forward.”

Federer, assessing his own performance, said he played “very well.”

“I had to because when you let Denis play, he’s got some serious power and he gets rhythm going. He can really put you in uncomfortable situations.”

This was the first time since 2007 that two teenagers have reached an ATP Masters semi-finals and although both suffered disappointing defeats, they leave South Florida with their heads held high.

Auger-Aliassime’s dream run finished with the youngster from Montreal competing confidently in the biggest match of his career even if he will rue the chances that escaped him after being broken while serving for the first and second set.

Despite the disappointment etched all over Auger-Aliassime’s face at the end, his run here will give him great confidence moving forward as he, and Shapovalov, aim to prove their Grand Slam credentials.

The 18-year-old is the youngest-ever male semi-finalist in Miami and only the second qualifier to reach the last four after Guillermo Canas reached the same stage in 2007 before losing to Novak Djokovic in the final.

Auger-Aliassime will also see his ranking jump from 55 to 33 in the world.

“I think I did the best that I could,” he said. “It’s a chance you can’t miss, serving two times for the set, and just -- I don’t know. It’s just terrible. The biggest lesson I learned was to stay in the present and believe in yourself.”