Sharjah extend lead at top after win over Al Jazira 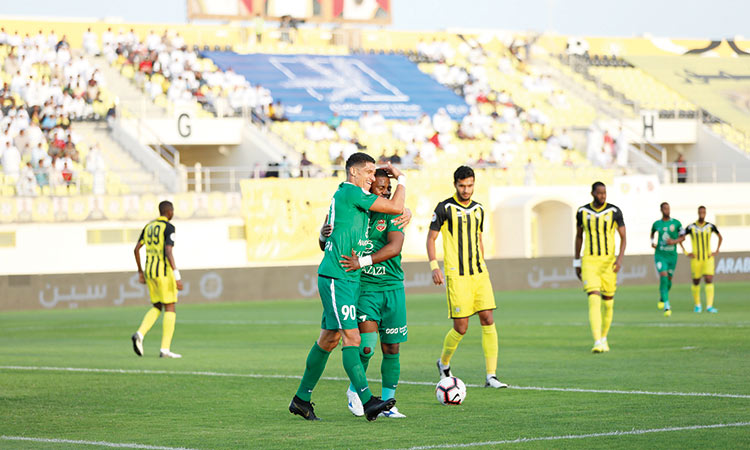 Shabab Al Ahli players celebrate after winning their game against Ittihad Kalba in matchweek 18 of the Arabian Gulf League on Friday. Supplied photo

Sharjah: Sharjah remained unbeaten as they overcame a resolute Al Jazira 3-2 in matchweek 18 of the Arabian Gulf League on Friday. Sharjah began the game at a frenetic pace and they were two up in the first nine minutes of the match. First stopper back from Brazil Igor Coronado scored in the fifth minute and followed it up with another goal four minutes later to put the table leaders 2-0 ahead.

Even though Al Jazira fought back and reduced the margin through Khalfan Mubarak in the 13th minute, it was Mohamed Alshehhi who put the hosts further ahead in the 29th minute. Sharjah led 3-1 at the half-time break.

It was Al Jazira who came out strongly in the second half, applying pressure, which paid off when Fares Juma scored in the 53rd minute to reduce the margin to 3-2.

However, that was all that the visitors could manage and in the end, Sharjah won the game to extend their lead at the top of the table provisionally by 11 points over second-placed Al Ain who play their match on Saturday.

Al Jazira meanwhile remain in the fourth position with this latest loss.

In the second late game on Friday, Baniyas beat Ajman 3-1. Goals for Baniyas came from Leroy George (12th), Vander Vieira (self goal in the 17th minute) and Pedro Conde in the 69th minute. For Ajman, Mame Thiam scored a consolation goal in injury time.

Earlier, Sebastian Tagliabue netted a brace to guide Al Wahda to a 2-0 win over Emirates Club at Al Nahyan Stadium on Friday.

Tagliabue first found the back of the net in the 36th minute. A cross from Chang Rim inside the box was headed by Tareq Alantali into Tagliabue’s path, who converted into the right corner of the net leaving the goalkeeper helpless.

The hosts headed into the halftime was a 1-0 advantage.

Al Wahda continued to apply pressure in the second half, which finally led to a second goal from Tagliabue. Ismaeil Matar’s through pass found the Argentine forward, who dribbled past Emirates defender before going one-on-one with the keeper and slotting home. This marked Tagliabue’s 17th league goal this season.

After winning the Arabian Gulf Cup last week, Shabab Al Ahli maintained the winning momentum as they defeated Ittihad Kalba 3-1 away from home in matchweek 18 of the Arabian Gulf League on Friday.

The guests got off to a quick start as Henrique Luvannor found the back of the net after seven minutes. Ismail Al Hammadi chested the ball inside the box but his shot was saved by Mohamed Albairaq. The Brazilian-Moldovan forward then latched on the rebound to give his side a 1-0 lead.

Shabab Al Ahli doubled their lead only five minutes later, thanks to Ahmed Khalil’s goal. Henrique Luvannor turned from scorer to provider as he passed the ball to Khalil inside the box and the latter went one-on-one with the keeper before easily slotting past him to make it 2-0 only 12 minutes after kick-off.

The hosts came close to reducing the deficit in the 20th minute but Hassan Hamza pulled off a smart save to deny Myke Ramos.

Khalil tried his luck, hoping to net a second goal but was denied by Albairaq in the 27th minute, before Luvannor missed the target.

Kalba had another chance to get back into the game on the half-hour mark but Hamza saved Balazs Dzsudzsak’s effort. There were no significant attempts in the remaining minutes of the first half as Shabab Al Ahli headed into halftime with a 2-0 advantage.

The hosts looked better in the early stages of the second half and managed to reduce the deficit in the 58th minute. Balazs Dzsudzsak’s cross found Mansour Albloushi inside the box who headed the ball into the left corner of the net to make it 2-1.

Shabab Al Ahli, however, didn’t stand still and attempted to extend their lead again. Khalil came so close to netting a second goal but his header hit the woodwork.

However, they went 3-1 ahead only few minutes later. Walid Abbas’ pass was deflected off Kalba’s defender inside the box to find Mauro Diaz, who scored a backheel goal in the 74th minute.

The Tigers had few attempts in the remaining minutes but Shaheen Aldarmaki was denied by the keeper and Tommy Reyes missed the target. They, however, had a golden chance to reduce the deficit after they were awarded a penalty deep into injury time but Balazs Dzsudzsak missed the target as they extended their winless run to five games.