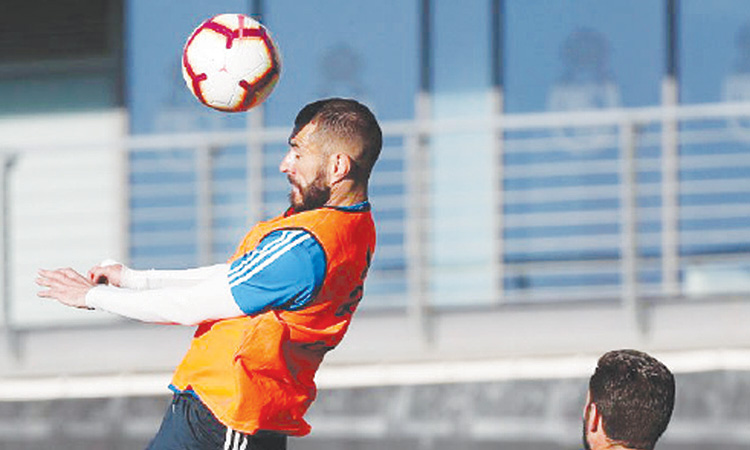 Real Madrid players attend a training session ahead of their match against Huesca. Supplied photo

Madrid: Real Madrid are out of the Champions League and out of the running in La Liga but they might have more to play for than Barcelona and Atletico Madrid in their final 10 games of the season.

Atletico’s defeat to Athletic Bilbao before the international break means Barca sit 10 points clear in the league, their cushion allowing them almost complete focus on Europe, where they face Manchester United in the quarter-finals next month.

Most alive then amongst the table’s top three is perhaps the sense of renewal at Real, where Zinedine Zidane’s reappointment has been quickly followed by reports of a summer overhaul and 500-million euro spending spree.

Zidane has insisted his current squad should not feel on trial in these final two months but the speculation will not have been lost on his players, whose futures look increasingly under scrutiny.

Potential targets Eden Hazard, Paul Pogba and Kylian Mbappe were the latest trio on the frontpage of L’Equipe on Thursday but Neymar, Sadio Mane, Christian Eriksen, Harry Kane and Matthijs de Ligt have all been mentioned too.

“We will change things, for sure, for the years to come,” Zidane said at his unveiling earlier this month. “We will have time to talk with the president and with the club about what we can do.”

Madrid face Huesca on Sunday when Zidane’s picks will offer another clue as to his thinking.

His opening game against Celta Vigo a fortnight ago became something of a reunion for the old guard as Keylor Navas, Isco and Marcelo were all recalled, and delivered.

Even Gareth Bale, whose relationship with Zidane was almost non-existent last season, started, and scored, to suggest his departure may not yet be a foregone conclusion.

A strong finish, and pipping Atletico to second place, would preserve the feel-good factor but a surge to make Barcelona nervous seems unlikely.

Barca are not only streets ahead on points but performances too, unbeaten in the league since November and with 12 goals in their last four matches, three of them against Sevilla, Real Madrid and Real Betis.

Lionel Messi hitting his sparkling best has been key, with his freshness for the Champions League now a priority.

“Having Leo on your team makes you feel like you can face anything,” said Gerard Pique after the win over Lyon two weeks ago.

Messi missed Argentina’s win over Morocco on Tuesday with a groin strain but was back in training with Barca on Wednesday while Luis Suarez also played a limited part in the session, having sprained his ankle before the ineternational break.