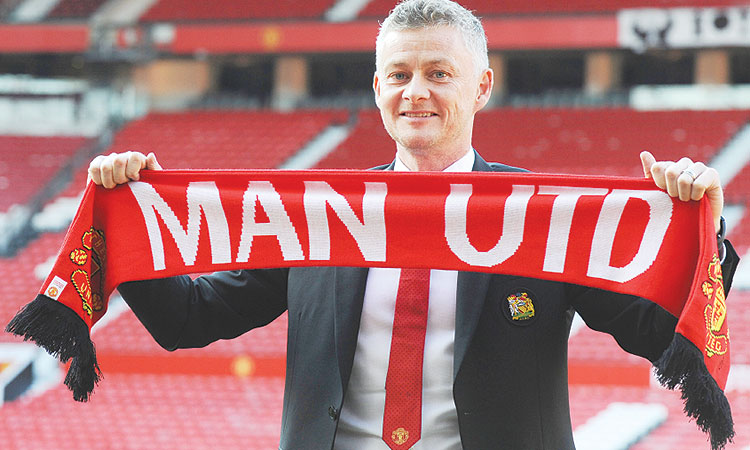 LONDON: Manchester City and Liverpool enter the Premier League home straight this weekend as Ole Gunnar Solskjaer takes his position in the Manchester United dugout for the first time as permanent boss.

With the international break over, City have eight games to retain their title but should they slip up, Liverpool are poised to pounce and become English champions for the first time since 1990 by winning their seven matches to come.

Manchester City’s potential run of 15 games to a historic achievement of winning a quadruple gets off to a gentle start at Championship-bound Fulham on Saturday. Trailing Liverpool by two points, City can crank up the pressure on Jurgen Klopp’s side by winning that game.

City boss Pep Guardiola has been keen to quieten any talk of a clean sweep of silverware with a hugely demanding two months to come should his side continue to progress on all fronts.

However, with the League Cup already won, the English champions remain in pole position to retain their Premier League title and are favourites for both the Champions League and FA Cup.

A run of 19 wins in their last 20 games has kept City on course in all competitions, but rather than disrupting their rhythm, a two-week international break may have come at a perfect time to recharge their batteries.

The ageing Sergio Aguero, David Silva and Fernandinho are no longer traipsing the globe with Argentina, Spain and Brazil respectively on international duty.

Liverpool, meanwhile, have the far harder task of hosting Tottenham on Sunday but know that a win will be a huge step towards the title with a relatively kind fixture list to come, barring a home game against Chelsea.

“A season is like that, you constantly prepare a basis for the final weeks,” Klopp told Liverpool’s official website.

Klopp has no injury concerns and plenty of reasons for optimism with Spurs mired in a slump and in danger of crashing out of the top four.

Mauricio Pochettino’s men have taken just one point from their last four league games and could see their three-point cushion over fifth-placed Manchester United cancelled out by the time they kick-off at Anfield.

Top-four race Tottenham’s slide means Arsenal, Manchester United and Chelsea are involved in a four-way battle for the two Champions League places behind Liverpool and City.

Unai Emery’s Arsenal are the form team in that group and go into their match at home to Newcastle on Monday buoyed by their win against Manchester Untied before the international break.

“In these next eight matches, we need to play with a lot of personality like we did against Manchester United,” Emery told Arsenal’s website.

United will be looking for a bounce after Solskjaer was appointed on a full-time basis on Thursday.

They take on Watford at home on Saturday licking their wounds after defeat to Arsenal was followed by an FA Cup exit to Wolves, which has taken the shine off the Norwegian’s flying start to life at Old Trafford.

“We are now in a great position to get into the Champions League but that is not decided until May 12 (the final day of the season) probably,” Solskjaer said.

“Eight games to go and two, so a quarter of what is left, against two fantastically improved teams in Watford and Wolves, best of the rest at the moment, so our focus and mine is on those two games,” he added.

Chelsea have stumbled in recent weeks with manager Maurizio Sarri facing multiple problems including a misfiring attack and pedestrian midfield.

Sarri hasn’t considered teenage winger Callum Hudson-Odoi ready for a Premier League start by Sarri, but made his full debut for England against Montenegro earlier this week to pile pressure on the Italian to unleash him when Chelsea visit Cardiff on Sunday.

Another Chelsea slip up, though, could also have serious ramifications at the bottom of the table.

Cardiff are third from bottom, two points behind Burnley and Southampton with Brighton, Crystal Palace and Newcastle all within seven points of the drop zone.

Brighton and Southampton have a huge chance to gain some breathing space when they face off at the Amex on Saturday.

Huddersfield, rooted to the bottom 16 points from safety, appear doomed while Fulham also look headed for the drop unless they can shock City and eat into the 13-point gap that separates them from survival.