Klopp fired up as Liverpool and Man.City head into run-in - GulfToday

Klopp fired up as Liverpool and Man.City head into run-in 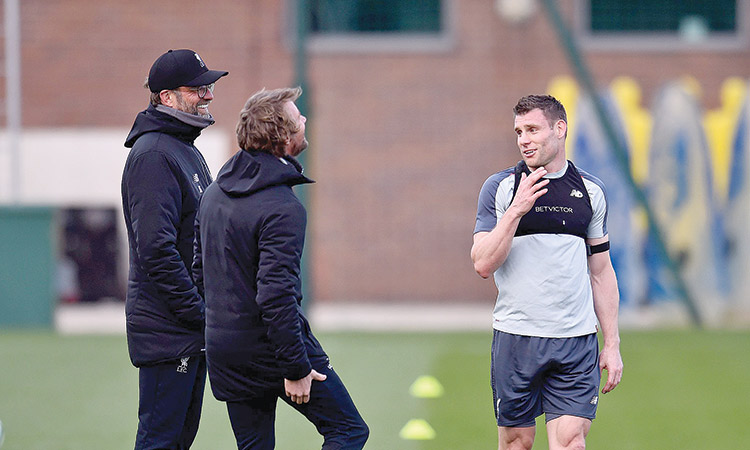 Manchester: Liverpool manager Juergen Klopp is relishing the prospect of a hectic finale to the Premier League title race as his side kick off a breathless charge to the finish line with a home clash against third-placed Tottenham Hotspur on Sunday.

Liverpool face Spurs in the game of the weekend, a day after title rivals Manchester City travel to struggling Fulham.

Klopp’s side have a two-point lead over Pep Guardiola’s City but have played a game more.

With both teams also playing Champions League quarter-finals in April — City face Spurs while Liverpool take on Porto — the games will come thick and fast and that is the way Klopp says he likes it.

“We created a wonderful base, now let’s use it.”

Liverpool right back Trent Alexander-Arnold is a doubt for the Spurs match due to a back injury, which forced him to withdraw from England’s Euro 2020 qualifiers against the Czech Republic and Montenegro.

Swiss winger Xherdan Shaqiri should be fit for the weekend after recovering from a groin injury that kept him out of international duty, while Egyptian Mohamed Salah should be fresh after resting during the break.

Tottenham midfielder Harry Winks is in with a chance of returning from a groin injury, though Eric Dier is out after suffering a thigh problem for England.

City, who have won six league games in a row, need to put pressure on Liverpool with victory at next to bottom Fulham.

Guardiola is hoping to have several players back to full fitness with Brazilian Fernandinho returning to training along with Belgian Kevin De Bruyne, who missed international duty with a thigh strain.

Ole Gunnar Solskjaer’s Manchester United hope to bounce back from their pre-break defeat to Arsenal and FA Cup loss to Wolverhampton Wanderers, but have a tough test at home to eighth-placed Watford.

Arsenal, who are fourth, take on Newcastle United at the Emirates on Monday.

Pressure is mounting on teams near the bottom of the table and there should be plenty of tension at the Amex where 15th-placed Brighton and Hove Albion face Southampton, who are 16th and two points above the relegation zone.

Meanwhile, United have added pre-season matches in Singapore, China and Wales, including a clash against Premier League rivals Hotspur, the club announced on Wednesday.

United will take on Inter Milan at the National Stadium Singapore on July 20, before travelling to Shanghai to face Spurs at the Hongkou Stadium on July 25.

The final match of the tour is scheduled against AC Milan at Cardiff’s Principality Stadium on Aug. 3.

These matches will be in addition to the two previously announced matches against Perth Glory and Leeds United on July 13 and July 17 respectively.

“These games, and the tour overall, will not only assist in our pre-season preparations, but also provide entertaining football and an opportunity to interact with our loyal fans in Australasia and Asia,” United’s executive vice chairman Ed Woodward said in a statement.

“This will be our third visit to Singapore and our fifteenth pre-season visit to China and we’re excited to be returning to both countries to play against top-class opposition there.”

At least four other Premier League clubs will visit China for their pre-season preparations with City, Newcastle, West Ham United and Wolverhampton Wanderers taking part in the Premier League Asia Trophy in Nanjing and Shanghai.

United’s last match in China was a defeat by Borussia Dortmund in Shanghai but that pre-season trip was remembered more for the clash with local rivals Manchester City which was cancelled due to torrential rain in Beijing.

Conditions are likely to be testing in Shanghai in July, when temperatures can exceed 30 degrees Celsius (86 degrees Fahrenheit), with high humidity and the likelihood of heavy rain.