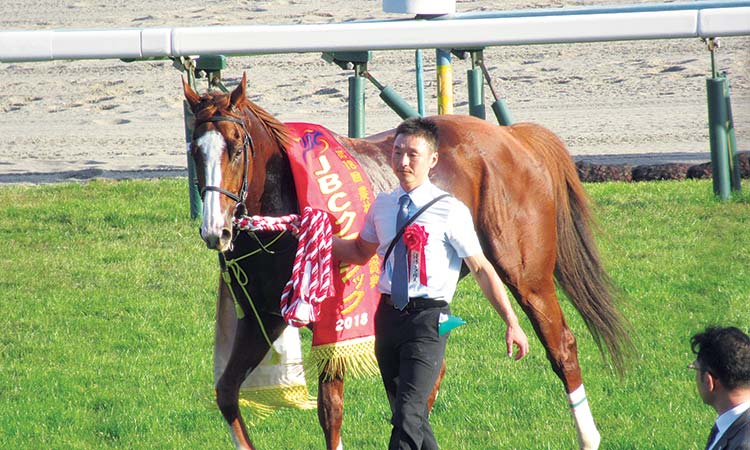 KT Brave’s conditioner Haruki Sugiyama avers that the Meydan dirt seems to be to the Japanese horse’s liking. Supplied photo

DUBAI: Consistent and solid are the most suitable words to describe KT Brave, the Japanese contender for the Dubai World Cup sponsored by Emirates Airline.

The KT comes from his owner’s name, Kazuyoshi Takimoto, who runs an electrical equipment manufacturing company. The horse was foaled in the Hidaka region, one of the most prolific breeding areas in Japan, Hokkaido.

His breeding farm, Okano Farm, is not a big breeding operation with only a few mares but has consistently produced graded horses during its 50-year-history.

After finishing eighth in his debut start over the turf as a 2-year-old, the now 6-year-old KT Brave was switched to dirt and has never looked back, winning 11 times with 8 seconds and 6 thirds in 33 career starts over the surface.

Sired by Admire Max, who was a two-time Hong Kong traveller and the 2005 G1 Takamatsunomiya Kinen winner, the stunning chestnut horse with a big blaze and four socks first showed his ability in the G2-Hyogo Championship over 1870m at the (second-tier) National Association of Racing’s Sonoda Racecourse.

He beat then 3-year-old Gold Dream, who would later become the JRA champion dirt horse of 2017, by seven lengths and was never off the board for the rest of his 2016 campaign.

During the rest of the season he raced very consistently in another six graded stakes races, never finishing worse than 5th and usually hitting the board.

In January of 2018, he captured his second Grade 1 title in the Kawasaki Kinen before collecting his 11th win and third at the highest level in the JBC Classic at Kyoto racecourse last November.

“He is actually a multiple graded race winner at the NAR circuits and winning with him in the JRA has been my target ever since he was transferred to my stable from his former trainer (Tetsuya Meno) due to his retirement early last year,” said his 38-year-old conditioner Haruki Sugiyama.

“I was very grateful to the owner to let me handle such an experienced and talented horse.”

Sugiyama continued, “I have been training him to shift his balance from his foreleg to his hindquarters to create more of a burst power for the speed type of racing dirt tracks in the JRA.”

Despite his flashy achievements in the NAR circuits, KT Brave has yet to win at the more recognised JRA-graded stakes level. However, he showed recent promise in both the Tokyo Daishoten (G1) and Kawasaki Kinen (G1) and the Meydan dirt seems to be to his liking.

After his final breeze on Wednesday Sugiyama said: “Upon to his arrival in Dubai, he was a bit tense and did not eat up well but once he acquainted himself with the surroundings, his appetite was back, so I could give him a fast workout as planned.

“His regular jockey Yuichi Fukunaga has told me the horse should be suited for the dirt at Meydan. From his movement in his gallop he was able to cope with the surface well, and I can reconfirm the track suits him. He races on the pace or can sit off the pace, so I wanted to have a good draw so he can run his race.

“Unfortunately, we drew 11 which will be fine as it is not the extremely outside. We will discuss tactics with the jockey later on this week.”

Joao Moreira will be on board KT Brave on Saturday, and perhaps the “Magic Man” can help this ultra-consistent performer deliver another good placing on the highest stage of all.