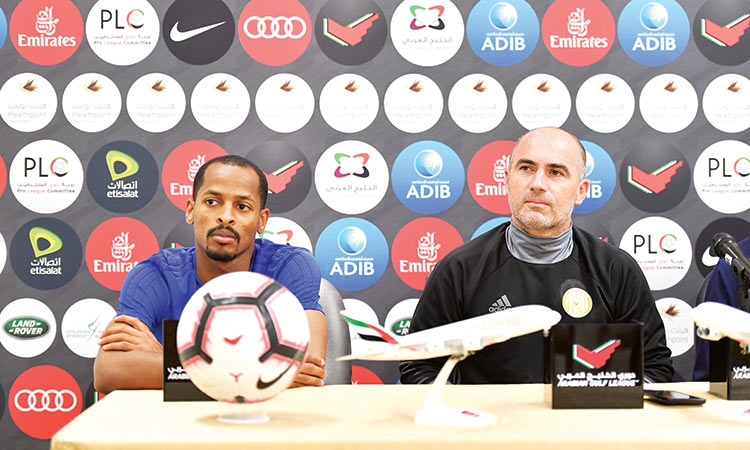 Abu Dhabi: Al Jazira coach Damien Hertog believes his players must produce a complete performance if they want to condemn Sharjah to their first defeat of the season in their Arabian Gulf League clash on Friday.

The AGL resumes after a three-week break with the Pride of Abu Dhabi facing a difficult test by visiting in-form league leaders Sharjah.

With Sharjah on a seven-match winning streak in the league, Hertog acknowledges his players must be fully focused for the full 90 minutes to deliver a positive result.

“It’s certainly a big challenge as we are playing Sharjah who are the league leaders,” Hertog said in the pre-match press conference.

“We have not beaten Sharjah before this season so we know it will be a tight and difficult game. My players must be on the top of their game, remain focused, play as a team and give everything they have got to produce a complete performance for the entire match.

“Sharjah have been strong this season but we are also confident that we can play well and beat them on Friday.” In preparation for the fixture, Al Jazira played two friendlies this month as well as holding a series of training sessions. Hertog believes those minutes on the pitches will certainly benefit his players against Sharjah.

“It has been a long time since we last played a competitive match but we have prepared the team for this fixture by having a lot of training sessions and playing friendly matches,” added Hertog, whose side is third in the AGL standings.

“That was very important as it helped the players maintain their fitness and be ready for Sharjah, who will be tough opponent.” Al Jazira will be without the services of injured star Mohamed Jamal and Abdullah Ramadan who is suspended for the clash. They will also be missing Ahmed Rabia after the striker suffered a head injury in a practice match last week.

Hertog gave an update on the recovery of the 23-year-old. “Ahmed Rabia is still in hospital but is recovering well. Our thoughts from everyone at Al Jazira is with him and we hope he gets well soon,” said Hertog.

“It will be a tough match against Sharjah especially as they are playing in front of their home fans,” he said.

“But although they are league leaders, the game is 50/50 and we have the belief that we can win the game.”

Meanwhile, Ittihad Kalba will kick-off the action as they host Shabab Al Ahli on Friday at 17:45. The Tigers will be hoping to end their four-game winless run as they lose to Al Wahda and Al Dhafra and drew with Emirates Club and Al Nasr. They now sit ninth on 20 points.

The recently-crowned side will be hoping to maintain the momentum to further improve their position on the league table. They are currently fourth on 32 points.

At 17:55, Al Wahda will clash with Emirates Club at Al Nahyan Stadium. Although they lost the cup title to Shabab Al Ahli, the Clarets’ recent results in the league are promising. They most recently defeated Bani Yas 4-1 to move up to fifth place on 27 points. They’ll, however, be without Leonardo Da Souza who misses the game due to suspension.

On the other hand, the Falcons have been getting relatively good results in the second half of the season, as they lose one game and drew three since the restart. They, however, remain 13th on 12 points.

At the same time, Bani Yas will be playing at home against Ajman. Both sides will be looking to return to winning ways after falling to defeats in the last matchweek. The Sky Blues currently sit fifth on 27 points, five above the Oranges who sit eighth.

The action resumes on Saturday at 17:45 when Dibba host Al Nasr at Fujairah Stadium.

At 17:50, Al Wasl will clash with Al Dhafra at Zabeel Stadium.