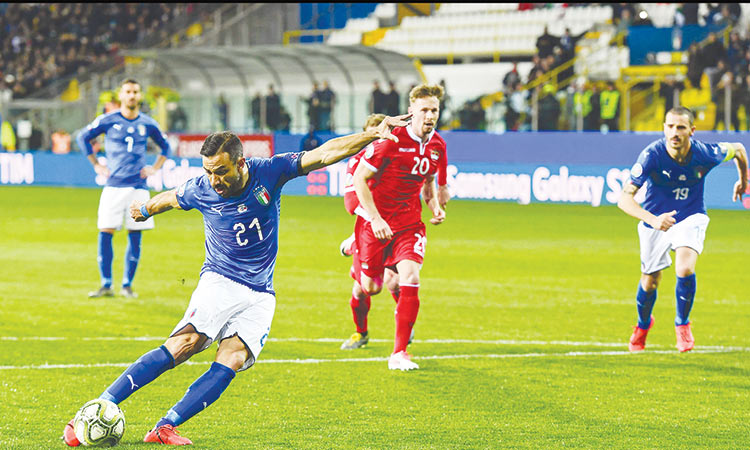 Bosnia threw away a two-goal lead to draw 2-2 with Greece and both are behind Italy on four points followed by Finland on three.

Liechtenstein were reduced to 10 men on the stroke of halftime when Daniel Kaufmann was sent off for a handball on his goalline.

Italy, who have a maximum six points in Group J, controlled the midfield through Verratti while Quagliarella set an example with his aggression.

The Azzurri, who are rebuilding under Mancini after missing out on the 2018 World Cup, broke the deadlock after 17 minutes as the 23-year-old Sensi’s header from Leonardo Spinazzola’s cross from the left found the roof of the net.

Verratti doubled the tally with a fine curled shot into the far side of the goal on 32 minutes.

Quagliarella scored his first goal from the penalty spot after a Nicolas Hasler handball, and his second after Kaufmann also used his arm and was shown a straight red card.

Kean, who had endured a frustrating first half, headed home the fifth on 70 minutes with second-half substitute Pavoletti adding the sixth on his international debut, tapping in after Benjamin Buechel had parried the 30-year-old’s header into his path. Italy next travel to Greece on June 8.

Elsewhere, Spain’s Alvaro Morata scored a goal in each half as they beat a highly defensive Malta side 2-0 away to move top of their group with two wins out of two games.

Malta were happy to sit back on the edge of their area and defend for most of the game, but the visitors found a way through in the 31st minute when Morata latched onto a long ball and sent his shot squirming under goalkeeper Henry Bonello.

The Atletico Madrid striker sealed Spain’s victory with another goal in the 73rd, drifting free of his marker to comfortably head in a perfectly-weighted cross from substitute Jesus Navas.

While Spain struggled to play free-flowing football, they had 80 per cent of possession and never looked like conceding against a Malta side who showed little ambition in attack and only mustered two shots on goal to Spain’s 23.

After two games Spain lead Group F with six points, while Sweden are second on four after drawing 3-3 away to Norway, who have one point. Malta are level on three points with third-placed Romania, while the pointless Faroe Islands are bottom.

But the clash in Dublin was overshadowed by irate Ireland supporters, who threw tennis balls on to the Lansdowne Road pitch in the first half in protest at controversial Football Association of Ireland chief executive John Delaney.

Delaney, due to take up the newly-created role of FAI executive vice-president, has come under pressure after it was revealed he provided a 100,000 euro (£85,000) cheque in April 2017 to the FAI, which did not appear in its audited accounts.

Delaney said he had loaned his employers the money “to aid a very short-term cash flow issue”.

Hourihane’s goal was enough to make it two wins from two Group D matches as McCarthy bids to take Ireland to next year’s European Championships. Denmark’s Henrik Dalsgaard scored a 93rd-minute equaliser to complete an incredible comeback from three goals down to draw 3-3 away against Switzerland in a pulsating clash in Basel.

Switzerland were on the verge of making it two wins out of two at the start of their Euro 2020 qualifying campaign but Dalsgaard outjumped goalkeeper Yann Sommer to head home and earn Denmark an astonishing and unlikely point.

The home team broke the deadlock in the 19th minute when Remo Freuler beat Denmark keeper Kasper Schmeichel with a cool finish for his first international goal.