US draw with Chile, remain unbeaten under Berhalter - GulfToday

US draw with Chile, remain unbeaten under Berhalter 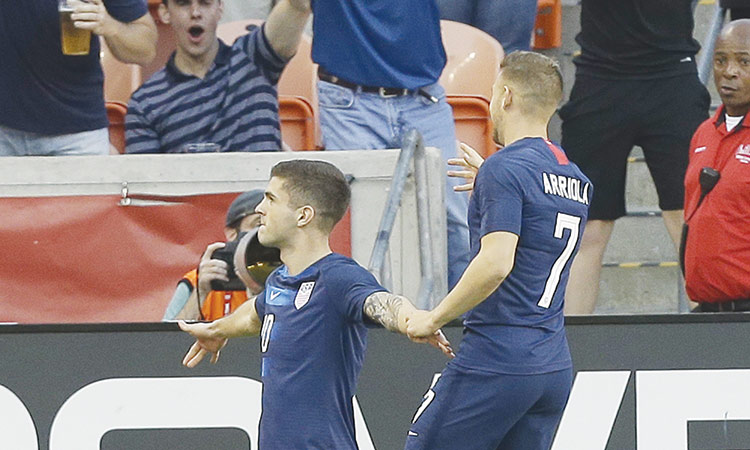 Christian Pulisic (10) of the US celebrates after scoring against Chile during their friendly match on Tuesday. Agence France-Presse

Los Angeles: Midfielder Christian Pulisic scored early but limped off with a quadriceps injury on Tuesday as the US remained unbeaten under coach Gregg Berhalter with a 1-1 friendly draw against Chile.

Pulisic became the youngest American to score 10 international goals when he opened the scoring at BBVA Compass Stadium in Houston in the fourth minute.

Pulisic sprinted onto a neatly played ball from Gyasi Zardes, racing into the penalty area and beating goalkeeper Gabriel Arias.

At 20 years, 189 days old Pulisic broke the US mark to double-digit international goals set by Jozy Altidore, who was 20 years, 337 days old when he scored his 10th US goal in October 2010.

The lead lasted just five minutes as Oscar Opazo knotted the score at 1-1 with a left-footed blast in the ninth, completing a sequence that saw US defenders Omar Gonzalez and Matt Miazga beaten.

Berhalter had enjoyed a perfect start since taking over as the fulltime coach in December last year, the most recent win a victory over Ecuador last Thursday.

South American champions Chile, meanwhile, were smarting from a 3-1 defeat to Mexico on Friday. But the worst news for the Americans was Pulisic’s quadriceps injury. He appeared to be hurting even before he went down in the 34th minute. A trainer came out to take a look before Pulisic departed under his own steam to be replaced by Sebastian Lletget.

Although Chile were able to control proceedings late, Zardes almost put the Americans in front again 10 minutes into the second half, but his effort sailed over the bar.

The draw was enough to maintain optimism for the rebuilding Americans.