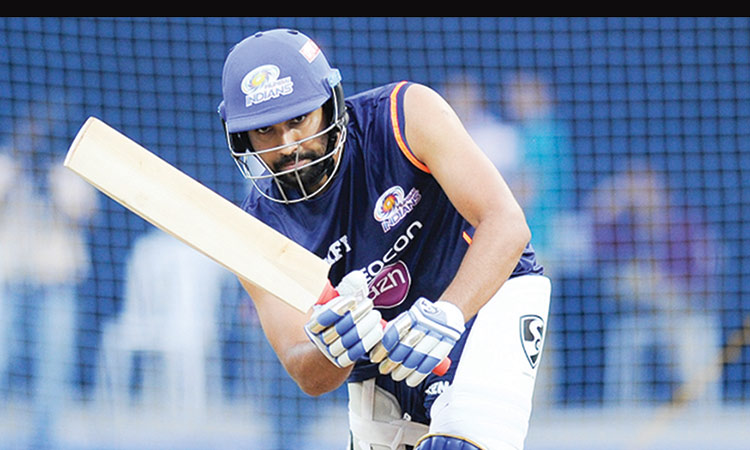 Mumbai Indians will hope their captain can replicate his form of international cricket in the IPL. Supplied photo

Bengaluru: Coming on the back of heavy defeats, both Royal Challengers Bangalore (RCB) and Mumbai Indians (MI) will look to get their act together and log their first win of the Indian Premier League (IPL) 2019 season at the M Chinnaswamy Stadium on Thursday.

Mumbai recieved a shot in the arm a couple of days back when their star pacer Lasith Malinga was cleared by Sri Lanka Cricket (SLC) to take part in the IPL.

SLC had earlier announced that only those players would be eligible for selection in the World Cup squad, who would compete in the Super Provincial One-Day domestic tournament, slated from April 4 to 11.

The verdict had forced Malinga to make himself unavailable for MI’s first six matches.

However, according to a report in ESPNcricinfo, the SLC has changed its stance after a few calls by BCCI.

SLC Chief selector Ashantha de Mel said that Malinga’s place in the World Cup bound squad is guaranteed, so he is free to participate in the IPL.

Virat Kohli’s RCB, who are yet to win the IPL and regularly draw a lot of flak for that, were bundled out for 70, the sixth-lowest score in IPL history, in their first game of the this year’s league against Chennai Super Kings.

RCB lost the game by seven wickets after their bowlers did well to try and put up a semblence of a fight but it was never going to be easy with such a paltry total on the board.

Not only did the team management read the conditions wrong, the famed RCB batting line up were also guilty of poor shot selection.

Against Mumbai Indians, who have the likes of Jasprit Bumrah, Mitchell McClenaghan and Ben Cutting, Kohli would know that his team will have to bat much better.

One positive aspect from their forgettable last match was the way wrist spinner Yuzvendra Chahal bowled, conceding just six runs from his four overs and taking a wicket.

Moeen Ali was good too and so was Haryana’s Navdeep Saini.

Coming to the visitors, Mumbai were blown away by a Rishabh Pant blitzkrieg in their opening encounter. The dashing stumper-batsman smashed an unbeaten 27-ball 78 taking the Mumbai bowlers, including India teammate Bumrah, for a ride.

Skipper Rohit Sharma would hope his bowlers get their house in order ahead of the RCB game and treat the Delhi poor show as a one off. Mumbai’s batting, except veteran Yuvraj Singh (53), looked ordinary too.