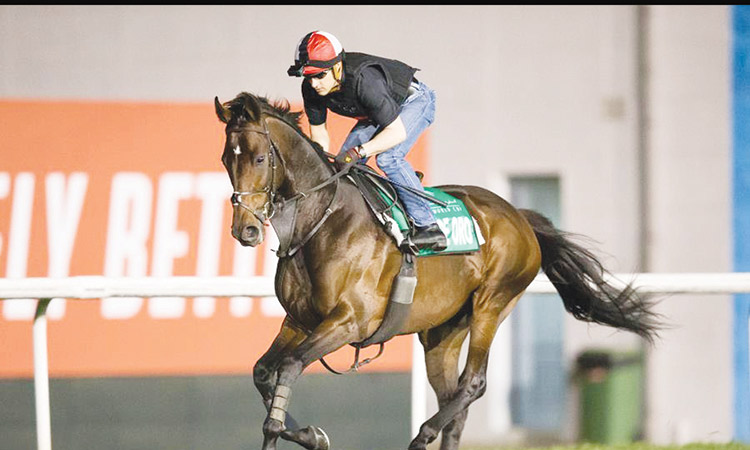 Trained by Kazuo Fujisawa, the 5-year-old son of King Kamehameha has won seven of 12 career starts, while banking $7,952,951. He will make his seasonal debut with the services of jockey Christophe Lemaire from post six as he looks to avenge last year’s fourth-place effort in the 2410m test on the Meydan turf.

Cheval Grand, a 7-year-old Heart’s Cry chestnut, has post a record of 3-4-5 from 18 career starts. Last season, he went winless in five starts, but was narrowly denied victory in the spring edition of the Tenno Sho (G1), coming up a neck short of Rainbow Line. There is little to choose between Rey de Oro and Cheval Grand, who both arrive at the Longines Dubai Sheema Classic from the Group 1 Arima Kinen Grand Prix, where they finished second and third, respectively. Hugh Bowman has the call aboard Cheval Grand, a career earner of $7,930,746, for his Meydan debut from post one.

Suave Richard, with $4,457,211 in earnings, is more lightly raced than his fellow Japanese raiders with a record of 3-1-2 from 10 starts, but is capable of doubling his Group 1-tallies on Saturday night.

Trainer Aiden O’Brien will saddle Irish-breds Magic Wand and Hunting Horn as he looks for his second Longines Dubai Sheema Classic score, having previously captured the event in 2013 with St Nicholas Abbey.

Last time out, Magic Wand, a 4-year-old daughter of Galileo, took on the boys for the first time in the inaugural Grade 1 Pegasus World Cup Invitational, finishing second behind well-regarded Bricks and Mortar over a soggy Gulfstream Park turf.

Hunting Horn, a 4-year-old son of Camelot, has won just twice from 14 starts, having made the grade in the 2000m Group 3 Hampton Court Stakes in June at Ascot.  He was narrowly denied a Group 2 win over 2400m in September when nosed out by Brundtland in the Qatar Prix Niel (G2). Through two starts in 2019, Hunting Horn has a pair of thirds to his credit. Wayne Lordan will have the call aboard Hunting Horn from post five .

Godolphin homebred Old Persian has a knack for having his picture taken with six wins from nine attempts for trainer Charlie Appleby. The 4-year-old Dubawi colt made a dramatic debut at Meydan in March when a nose the best over Racing History in the Group 2 Dubai City of Gold. With three Group 2 wins from four starts at the distance, Old Persian will now be given his third attempt at a Grade 1-breakthrough. William Buick, aboard for the Dubai City of Gold score, retains the mount from two.

Desert Encounter, trained by David Simcock for Abdulla Al Mansoori, earned his Grade 1 stripes with an out-of-the-clouds score in the Canadian International at Woodbine. Last of 11 at the half, the 7-year-old Halling gelding made up considerable ground over the lengthy homestretch to finish a length the best of Thundering Blue in the 2400m classic. Jim Crowley, who guided Desert Encounter to a wide-traveling third last out in the Dubai City of Gold, retains the mount from eight.

Godolphin’s Racing History, a 7-year-old son of Pivotal, completes a compelling Longines Dubai Sheema Classic field. Trained by Saeed Bin Suroor, Racing History is Group 1-placed at the distance, with a good second in the Grosser Preis von Bayern over a yielding Munich turf in 2016. However, with two wins from 11 starts, the lightly-raced gelding will require a career-best effort to topple the field. The Longines Dubai Sheema Classic will be the penultimate race on Saturday’s lucrative Dubai World Cup card.