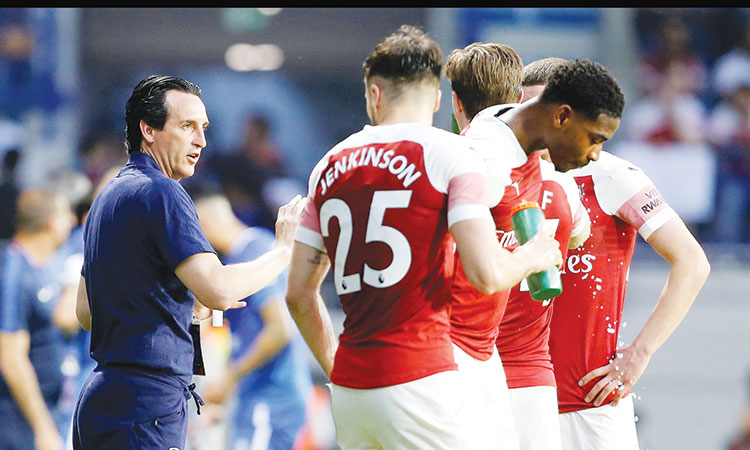 ubai: The Arsenal squad left for London on a high note, concluding a successful week busy with warm-weather training, which culminated in a friendly match with Al Nasr on Tuesday.

The match was held to mark the official inauguration ceremony of the newly renovated Al Maktoum Stadium. Arsenal coach Unai Emery vowed to come back to Dubai later this year to play in the Hamdan Bin Rashid Challenge Cup in December.

Ahmad Khoury, Vice-President, Board of Directors at Al Nasr, confirmed that Arsenal have already agreed to return for the Hamdan Bin Rashid Challenge Cup that is likely to be held during the winter break.

Arsenal coach Unai Emery was bowled over by the training facilities in Dubai during their short sojourn, which he promised to use as a springboard in their final push for the Premier League season.

“We are happy to be here. We enjoyed our stay in this wonderful city. The training facilities are awesome. We had a good match against Al Nasr.

“This five-day training camp in the warm weather and Al Nasr friendly will surely help us in our final push at the EPL campaign,” said Emery.

“We are taking a lot of positive things from this tour. It was a very enriching experience for the young players. We are confident of qualifying for the Champions League, either through Premier League or Europa League.”

Arsenal are fourth in the Premier League standings and chasing a UEFA Champions League spot for the next season through a direct qualification by finishing in the top-four with eight rounds remaining.

Emery, who replaced long-serving coach Arsene Wenger last season, has done well with the Gunners since taking over the North London club. Under him, Gunners have notched up eight wins and a draw in their 11 matches. Arsenal have provisionally moved into fourth overall in the Premier League standings with 60 points, just one shy of cross-city rivals Tottenham Hotspur (61).

However, with just eight rounds remaining in the league, Arsenal will have to be wary of no further slip-ups as Manchester United (58) and Chelsea (57) are hot on their heels.

However, their next assignment after reaching London will be against Newcastle on April 1. They have the quarter-finals of the Europa League to come as well, when they take on Italy’s Napoli across two legs next month.

“We are very happy and proud that we got a chance to play against a world-class team like Arsenal. I am also very happy with the performances of our boys. They did a wonderful job as we gave them a tough fight.”

Al Nasr went down fighting 3-2 against Arsenal in the friendly. It was Al Nasr which opened the scoring in the 14th minute and Arsenal had to rallied to beat them.

“We had a good first-half and we could have scored a few more goals but we spurned too many chances. But irrespective of the result, I am happy with the way the boys played,” he added.