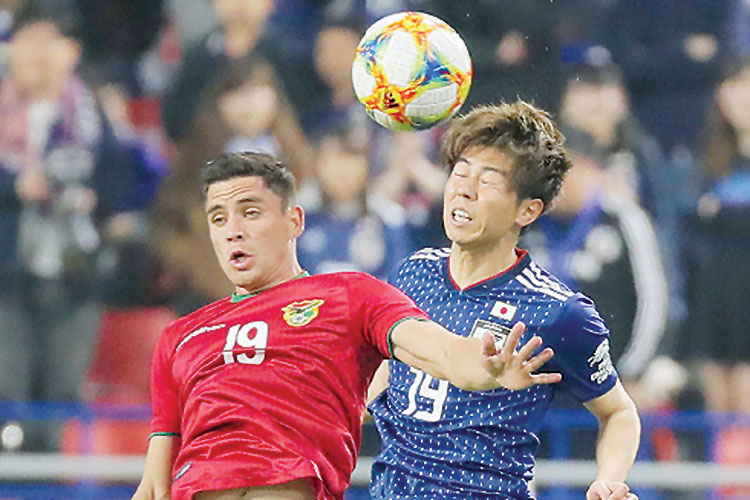 Japan’s Koki Anzai (right) vies for the ball with Bolivia’s Henry Vaca during their friendly match in Kobe on Tuesday. Agence France-Presse

Kobe: Japan’s Shoya Nakajima came off the bench to score the only goal in a 1-0 victory over Bolivia in an international friendly in Kobe on Tuesday. The diminutive forward, who became the most expensive Japanese player when he moved to Al-Duhail in January, scored the winner in the 76th minute having come off the bench 15 minutes earlier.

Japan coach Hajime Moriyasu made a swathe of changes after his side’s loss in another friendly against South American opposition last Friday, when they played Colombia, including bringing Shinji Kagawa back into the starting line-up.

But the new players struggled to take advantage of their overwhelming possession until Moriyasu made his second half changes.

The three attacking substitutes - and usually Moriyasu’s favoured forward line — of Ritsu Doan, Takumi Minamino and Nakajima combined finally to unlock the Bolivian defence and give the Samurai Blue a morale-boosting win.

Japan have used the friendlies as preparation for the Copa America beginning in Brazil in June, which they have been invited to play in along with Qatar.

Japan, the Asian Cup runners-up, have now played 14 games since the Russia 2018 World Cup and have only lost twice under Moriyasu.

Bolivia, meanwhile are on a miserable run, having failed to win since a 3-0 victory over Myanmar in October. They begin their Copa campaign against hosts Brazil on June 15.

South Korea made it two wins out of as many matches with a 2-1 triumph over Colombia.

Son’s first-half strike and Lee Jae-sung’s tie-breaking goal in the second half before a sellout crowd of over 64,000 at Seoul World Cup Stadium gave 38th-ranked South Korea, who defeated Bolivia 1-0 last week, their second straight win over No 12 Colombia.

Luis Diaz had the lone goal for Colombia, whose strong push for an equaliser was foiled by the heroics of goalkeeper Jo Hyeon-woo.

Son, the Tottenham Hotspur ace, entered Tuesday’s contest without a goal in eight matches under coach Paulo Bento but finally found the back of the net in style as the beneficiary of some pretty passing play.

Hwang In-beom picked Gustavo Cuellar’s pocket in midfield and poked the ball ahead to forward Hwang Ui-jo. When multiple defenders collapsed on him just outside the box, Hwang found Son charging down the right side and threaded a perfect pass.

Son fired a hard shot at goalkeeper Ivan Arboleda, who only got a touch of the ball and fell backward as it sailed past him.

James Rodriguez came off the bench at the start of the second half and his presence alone seemed to light a fire under the stagnant Colombian attack, with the South Americans leveling the tie just three minutes later thanks to some great individual effort by Luis Diaz. Diaz secured the ball inside the left edge of the box and made his way through the defence. He was nearly stripped of the ball, but after regaining control, Diaz beat Kim Moon-hwan and floated the ball into the far corner for his first international goal.