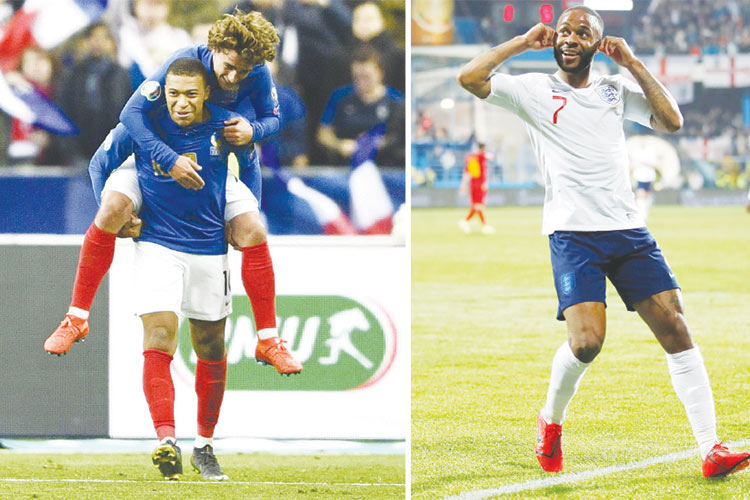 Mbappe scored one and set up two more as the reigning world champions crushed Iceland 4-0 at the Stade de France to move top of Group H in Euro 2020 qualifying.

The result gives France, 4-1 winners over Moldova in their Euro opener, six points from their first two matches and puts them ahead of Turkey, who also won 4-0 on Monday, on goal difference.

Samuel Umititi, Olivier Giroud, Mbappe and Antoine Griezmann all scored as Iceland struggled to cope with a totally dominant France side.

Giroud’s 35th France goal moved him into third on the all-time list of French scorers, the Chelsea striker now trailing only Michel Platini (41) and Thierry Henry (51).

In Group A, England, fresh from a 5-0 demolition of the Czech Republic in which Raheem Sterling hit a hat-trick, were forced to come from behind in a 5-1 win over Montenegro.

But another impressive victory for the Three Lions was overshadowed by allegations of racist abuse in Podgorica.

Sterling celebrated the visitors’ fifth goal by cupping his ears towards the home fans.

“Best way to silence the haters (and yeah I mean racists),” Sterling tweeted alongside a photo of his celebration.

“I definitely heard abuse at Danny Rose when he got booked at the end of the game. There is no doubt in my mind it happened. We will make sure that is reported to UEFA because it’s not acceptable,” said Southgate. “We’ve got to make sure we support our players.”

Marko Vesovic stunned England early on, but after drawing on their two previous visits to Podgorica, England showed why their current crop are among the favourites to be European champions next year.

Michael Keane’s header restored parity before Ross Barkley’s double either side of half-time put the visitors in command and Harry Kane and Sterling rounded off a comprehensive victory.

And after scoring just twice in his first 45 caps, Sterling now has six goals in his last four England games as he raced onto Jordan Henderson’s through ball before slotting low past the goalkeeper.

It was a different story in Lisbon as Fernando Santos’ reigning European champions Portugal, held to a 0-0 draw at home by Ukraine in their Group B opener, notched up a second draw, 1-1 at home to Serbia.

If the result wasn’t disappointing enough, captain Ronaldo hobbled off after 30 minutes with no word on whether the five-time Ballon d’Or winner would be fit to play for his club Juventus in the first leg of their Champions League quarter-final at Ajax on April 10.

The 156-time international then left the field after he pulled up chasing a ball on the left wing.

He received quick treatment from members of the medical team before returning to action but was replaced minutes later.

In his absence, Porto’s Danilo Pereira netted a 42nd-minute equaliser, hammering a shot from outside the box into the top corner past a helpless Dmitrovic.

Elsewhere, Turkey made it two wins from two in Group H, like France, with a 4-0 victory at home over Moldova.

Two first-half goals in the space of three minutes thanks to Hasan Ali Kaldirim and Cenk Tosun did the damage at Eskisehir.

Tosun bagged his second 10 minutes into the second half while Kaan Ayhan wrapped up a resounding win with Turkey’s fourth.

Kosovo marked their maiden Euro qualifier with a 1-1 Group A draw against Bulgaria, but there was heartbreak for Luxembourg - 2-0 winners over Lithuania on Friday - as a Gerson Rodrigues own goal six minutes into injury time handed Group B leaders Ukraine a 2-1 win.