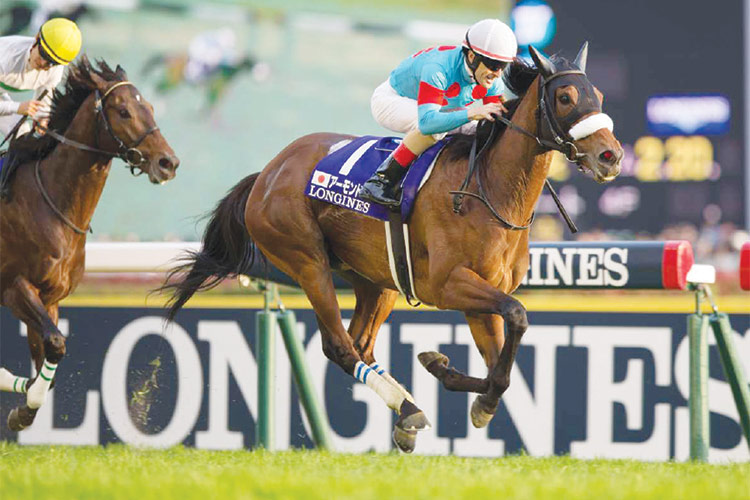 DUBAI: Ever since she first flashed her brilliant speed in the Oka Sho (Japanese 1000 Guineas), Almond Eye has quickly gained notoriety as the most exciting filly to make the rounds since Gentildonna. The comparisons don’t end there as Almond Eye later went on to capture all three legs of the Filly Triple Crown and the Japan Cup, the same grand slam as Gentildonna managed in 2012.

Earlier this year she was named the Japan Racing Authority’s 2018 Horse of the Year, just as Gentildonna had been in 2012 and she will continue on that same general path by making her first start as a 4-year-old in Dubai.

Almond Eye is likely be be compared to Gentildonna for the rest of her life, but this season will be her opportunity to continue to carve her own path, a task she started by setting a world record for 2400m in the Japan Cup (G1) last year. Instead of running in the Longines Dubai Sheema Classic like Gentildonna did, she will head to the Dubai Turf Sponsored by DP World instead. It has been a move that has been continually questioned by the media, but her connections had clear answers at the ready.

“I had considered the Dubai Turf first as it is a one-turn race and will be easier on her since it will be her first start back,” trainer Sakae Kunieda said.

Silk Racing Co. president Masashi Yonemoto added: “We took Kunieda’s suggestion for her and since horses like 2014 Longines World’s Best Racehorse Just a Way have won this race and it is so highly rated each year that it would be a good option for her. She has run so well from 1600m to 2400m that 1800m will be a good distance for her.”

When asked if the Prix de l’Arc de Triomphe was still the plan for her, Kunieda explained that the final decision will be made by her owners at Silk Racing Club. “We want to take it one step at a time,” he said.

Yonemoto added: “For now, there is no set plan for her autumn campaign. We will see how she does in Dubai and how she comes out of it and from there make the decision on what is next. We only want to think about the race here before us. It is very exciting to get to go abroad with her and we hope it goes well.”

Almond Eye in her first start on the world’s stage will be taking on two other Japanese mares who have proven form abroad. Vivlos won the Dubai Turf in 2017 and was second last year before finishing second in the Hong Kong Mile in December.

The other is Deirdre who ran third in the Dubai Turf last year and second in the Hong Kong Cup in December. If the 4-year-old filly can win this year’s renewal she will manage to do what Gentildonna could not in triumphing in her first international start.

“Normally, I’d be a little on edge about starting here fresh off a break,” said regular jockey Christophe Lemaire. “But she has enough ability to overcome that, so I am not worried.”

When asked about it, Kunieda said: “She runs well when fresh.” As the daughter of Lord Kanaloa sets out to make her own legend she is accompanied by her regular rider in Lemaire. She has become wildly popular in her home country of Japan and the fan enthusiasm for her Dubai debut cannot be understated with fans making their own flags and stickers and the sale of Almond Eye stuffed animals, hats, and other various kinds of memorabilia.

Her trip to Dubai sparked a massive jump in the number of Japanese journalists covering the Dubai World Cup meeting. She is likely to be the one to beat on Saturday and will have a massive target on her back, but given her closing kick, she’ll be a fast-moving target.