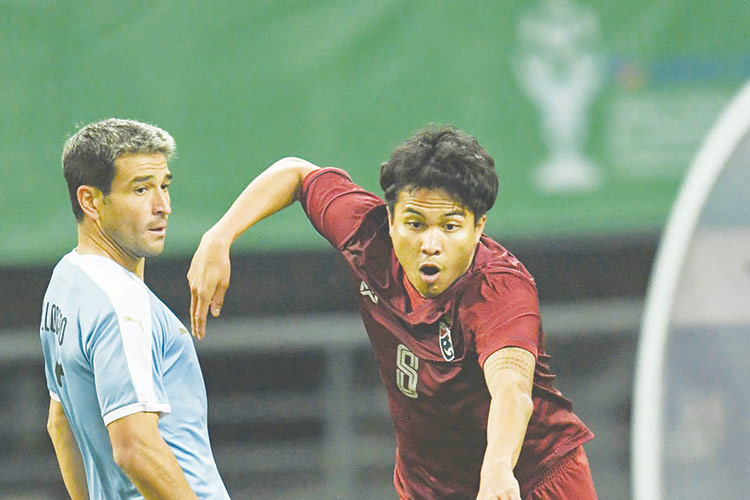 Thailand and Uruguay players vie for the ball during their China Cup final match on Monday. Agence France-Presse

Nanning: Uruguay retained the China Cup after beating Thailand 4-0 in the final, while a first half goal from Eldor Shomurodov saw Uzbekistan secure a 1-0 win over China to finish third on Monday.

Thailand had to concede to Uruguay’s superiority as the South Americans took the lead just six minutes into the tie with Matias Vecino Falero rising high to head home the ball.

Thailand did their best but Uruguay doubled their advantage seven minutes before the break, when a defensive lapse allowed an unmarked Gaston Pereiro to direct Cristhian Stuani’s pass from the left flank into the goalmouth.

Giorgian De Arrascaeta came off the bench right after the break, and he proved his worth on 58 minutes with a curling corner kick which skipper Stuani slotted home.

Thailand found it difficult to breach the Uruguay defence and two minutes from time, Maximiliano Gomez Gonzalez pounced on a loose ball. His shot hit defender Suphan Thongsong and the deflection saw goalkeeper Siwarak Tedsungnoen wrongfooted and the ball settled in the net.

China followed up Thursday’s 1-0 home loss to Thailand with another wretched display in the four-team China Cup, and have now failed to score in two games under the World Cup winner.

The 45-year-old legendary defender, who succeeded mentor and fellow Italian Marcello Lippi, is already under pressure from a Chinese public long disenchanted with their national side.

In front of a sparse crowd for the mid-afternoon match in Nanning, China failed to muster a shot on target and there was a smattering of jeers at the final whistle. Cannavaro, who for the moment is also in charge at Chinese Super League side Guangzhou Evergrande, made five changes to the side lucky to lose by just one goal to Thailand.

The wholesale changes only made China -- missing the rested Espanyol forward Wu Lei -- less effective. They were already on the back foot when forward Eldor Shomurodov took advantage of hesitant defending by Evergrande’s Zhang Linpeng on 35 minutes to lash the ball into the roof of the net for Uzbekistan, who are 89th in the FIFA rankings to China’s 72nd.

Uzbekistan, soundly defeated 3-0 by Uruguay on Friday, were also the better team in the second half and should have extended their lead, but China-based substitute Odil Ahmedov headed straight at goalkeeper Yan Junling.

The meek defeat leaves China, who have grand ambitions to host a World Cup and become a major footballing force, bottom of the four sides in the China Cup.

Uruguay and Thailand play later Monday in the final of the annual mini-tournament.

Cannavaro’s short reign as China coach could already be over after the hosts were beaten for the second time in five days. The World Cup winner was put in charge 10 days ago, but local media had speculated that the China Cup amounted to an audition to be fellow Italian Marcello Lippi’s long-term successor.