Pletcher eyes results as Audible readies to make himself heard 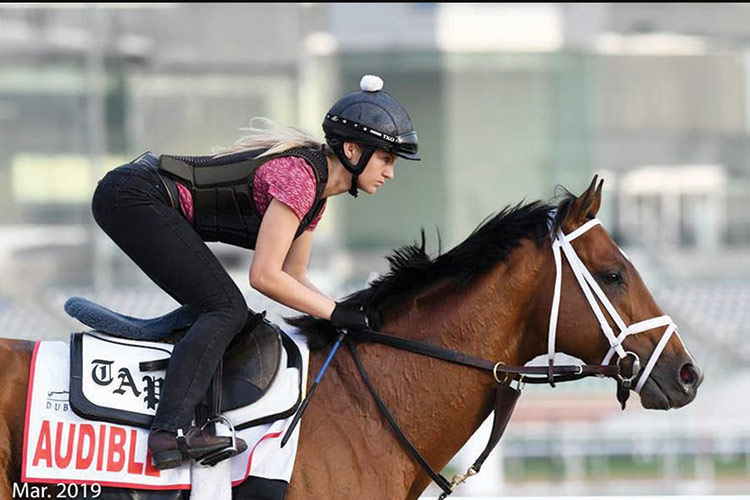 Which version of Audible will show up for his expected run in the Dubai World Cup is the $64,000 question for his connections. Supplied photo

Dubai: When it comes to pulling off some sensational illusions, racehorses could put Houdini to shame with their collective sleight.

They can act like the second coming during morning hours and then leave their conditioners fitful when the race day results fail to match. Conversely, they can give off airs of disinterest in their daily training only to hit the competitive switch when the starting gates open.

Throughout his nine-race career, Audible has mastered the art of leaving trainer Todd Pletcher suitably stumped. This time last year, the son of Into Mischief looked downright ordinary in his preparations, but went on to deliver his best efforts to date. While the last few months have seen Audible finally start touting himself in the morning, backing up that gusto in the results column has become the new challenge.

Which version of Audible will show up for his expected run in the US$12 million Dubai World Cup sponsored by Emirates Airline is the $64,000 question for his connections. If it’s the one that captured the Holy Bull Stakes (G2) and Florida Derby (G1) last year prior to his third-place finish in the Kentucky Derby, there stands a good chance the bay colt owned by China Horse Club, WinStar Farm, Head of Plains Partners and Starlight Racing could become the latest American-based runner to depart with the golden hardware.

In his last two starts, however, Audible has looked a notch below his best self, finishing second in the Harlan’s Holiday Stakes (G3) last December and fifth in the Pegasus World Cup Invitational Stakes. He caught a sealed, sloppy Gulfstream Park main track on both occasions –conditions he didn’t appear to relish – but he had also given his camp reason to think he would be sitting on go regardless.

“What’s been frustrating about his last two starts is he’s breezed better for those two races than he has really at any time in his 3-year-old year,” Pletcher said.

“He’s somewhat of an inconsistent work horse and during his 3-year-old year, I was concerned going into the Florida Derby because his final work wasn’t quite as sharp as I was hoping for and he ran terrific. Since then, since coming back, he’s really turned into a very consistent training horse.”

One thing that has often been steadfast for Audible is his ability to give an honest account of himself even when victory eludes him. His outing in the Pegasus World Cup marked the first time he had finished worse than third and his five career victories have been earned at distances from 1400m to 1800m.

When the attractive chestnut Dolkong placed third in Round 3 of the G1 Maktoum Challenge sponsored by Emirates Airline on Super Saturday, it represented a pinnacle of achievement for a South Korean-trained horse.

Just being part of the line-up for Saturday night’s Dubai World Cup sponsored by Emirates Airline is a dream come true for promoters of the sport in the American-bred’s adopted homeland.

Not that it will filter through to a TV audience in his adopted country - where even local racing is not beamed live to homes - but to counteract this, the Korean Racing Authority will give his legion of fans an opportunity to watch him compete against the world’s best on the huge video screen at Let’s Run Park in Seoul at the admittedly challenging hour of 1:40 a.m. local time.

“He is the most popular horse in Korea and we have many people talking about him in the mainstream media. His performances in Dubai have captured the imagination and we are very proud of what he has done,” Dr Seungho Ryu, the KRA’s international racing manager, noted.

Overseeing the 5-year-old’s preparation is trainer Simon Foster. On this third start at Meydan in late February he routed a Listed line-up by almost 10 lengths to fuel connections’ hopes that he could feasibly seal a slot in the Dubai World Cup with a big run on Super Saturday.