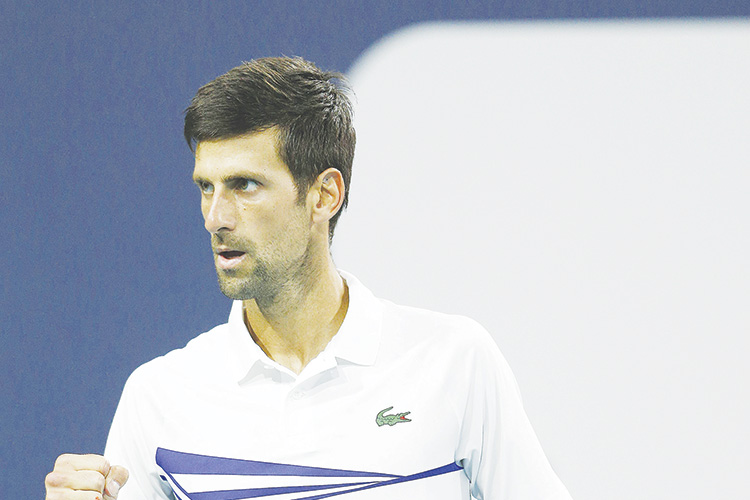 Novak Djokovic reacts after winning a point against Federico Delbonis (unseen) during their Miami Open third round match in Florida on Sunday. Agence France-Presse

Miami: Novak Djokovic remains on course for a record seventh Miami Open title, but the world number one admitted to a loss of focus in a 7-5, 4-6, 6-1 victory over spirited Federico Delbonis which booked his place in the last 16.

Djokovic is hoping to eclipse Andre Agassi’s six ATP crowns in South Florida over the next week and although the 31-year-old endured some shaky moments at Hard Rock Stadium, he still possessed enough quality during the key moments to see off the battling Delbonis.

The Serbian, though, wasn’t happy with letting a 5-2 advantage slip in the first set and became furious with himself as the second squirmed from his grasp.

He will need to tighten up his game if he is to reach final with Roberto Bautista Agut waiting in the fourth round after the Spaniard defeated Italian Fabio Fognini 6-4, 6-4.

“To be honest, I lost my focus,” said Djokovic who smashed 36 winners compared to 24 from Delbonis. “I should have done better I think mentally than I have done at the end of the first two sets.

“I managed to really play well last couple games of first set, go up a break, put myself in front, then I played a couple of really bad service games. Credit to Federico, he stepped in.”

Djokovic had looked impressive in the second round win over Bernard Tomic and the Serbian continued his decent form by immediately imposing himself onto the Argentine.

Djokovic moved 5-2 ahead but after he missed a set point opportunity on the Delbonis serve, his game deserted him and suddenly, the South American had a spring in his step.

Delbonis had opportunities to steal ahead, yet calling on all his experience and mental resolve, the Serbian was able to hold firm and take the opener.

The world number one was getting incredibly frustrated , he received a warning for racquet abuse and was furious for allowing a 3-1 lead to slip in the second, yet credit to Delbonis who stayed calm and served out confidently to force a decider, something which looked beyond him midway through the opening set.

He couldn’t keep the pressure on, however, and when Djokovic managed to get 3-1 ahead, this time there was no way back for the 28 year-old from Azul who rightly received an ovation from the center court crowd for his monumental efforts.

“I think last four games were terrific, so I ended up in a positive way,” Djokovic added.

Defending champion John Isner blew Spain’s Albert Ramos-Vinolas off court with serves touching 139 mph as the American sealed an ultimately comprehensive 7-5, 7-6 (8-6) win to set up an intriguing match with Kyle Edmund in the last 16 after the British number one impressively saw off Canadian Milos Raonic 6-4 6-4.

In the women’s draw, Simona Halep kept alive hopes of regaining the world number one ranking on Sunday, beating Polona Hercog 5-7, 7-6 (7/1), 6-2 to reach the last 16 where she will play Venus Williams.

Halep, 27, lost her place at the top of the rankings following Naomi Osaka’s triumph at the Australian Open earlier this year.

But with the Japanese faltering here on Saturday, Halep can return to the position she last held at the end of 2018 if she lands the Miami Open for the first time. Seven-time Grand Slam champion Williams, meanwhile, swept past Russian Daria Kasatkina 6-3, 6-1.

“Simona always plays flawless Tennis against me, so I have to be ready for that,” Williams said.