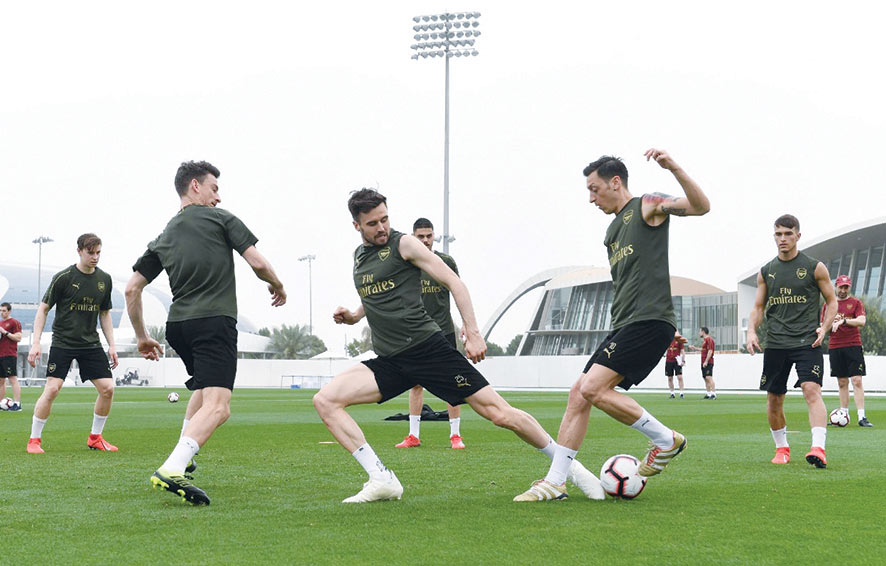 Arsenal players attend a training session in Dubai ahead of their match against Al Nasr.

Dubai: Al Nasr will take on the Premier League club Arsenal in a friendly match to mark the official inauguration of the refurbished Al Maktoum Stadium in Dubai on Tuesday.

The ground, opened originally in 1981, underwent a significant refurbishment last year ahead of the Asian Cup in January.

In a groundbreaking move, Al Nasr management signed an agreement with their Premier League counterparts to play a friendly against them in Dubai.

Arsenal’s visit and the friendly match against Al Nasr will further enhance Dubai’s status as a top sporting destination of the world.

The Gunners will use Tuesday’s match as a springboard in their final push for the Premier League season, according to manager Unai Emery.

They are fourth in the Premier League standings and chasing a UEFA Champions League spot for the next season through a direct qualification by finishing in the top-four with eight round remaining.

The Gunners resume their domestic campaign against Newcastle United on April 1. They have the quarter-finals of the Europa League to come as well, when they take on Italy’s Napoli across two legs next month.

The Premier League club is in the UAE for five days, visiting different landmarks of the city including Dubai Frame –– the latest addition to the long list of Dubai’s incredible architectural wonders. The Gunners also enjoyed the hospitality of Sheikh Hamdan Bin Rashid Al Maktoum, Deputy Ruler of Dubai and UAE Minister of Finance, who is also the long-standing president of Nasr, at his palace in Zabeel.

After visiting the palace Emery was all praise for the city and how they are enjoying their stay in Dubai.

“We are happy to see our fans and enjoying the training amenities,” said Emery.

“We are also very happy with all the people, who have worked so hard to make our stay in Dubai so comfortable,” he added.

At the same he also dropped a hint to try bench strength against Al Nasr for the upcoming matches back home.

“All matches are important for us. It is a friendly but we can try different players and take more confidence and rhythm for the next matches that are coming back home,” he concluded.

Meanwhile, Al Nasr coach Benat San Jose expressed his delight in getting the opportunity of playing a high-profile friendly against such a big team, terming it as a proud moment in the club’s history.

“We are very proud to be a part of the historic moment by playing against one of the top teams in the world like Arsenal,” San Jose said.

He also praised the club management for arranging such a high-profile match for his team.

“And, also as a coach, I am very proud for this match to be a part of Al Nasr, because it shows what a big club we are and what an excellent administration we have that they can bring one of the best clubs of the world to play against us.”

Commenting on the new stadium, which has undergone drastic changes during its refurbishment, he said: “I believe the beautiful and wonderful stadium that we have deserves to have a match of this calibre.”

San Jose knows the challenge that his team is likely to face against their Premier League counterparts. He is likely to pit a full-strength Al Nasr, not wanting to take any unnecessary risks.

Al Nasr have struggled under him since he was appointed as their manager in December. They have not won in the last seven matches under his tutelage. They are at the 11th spot in the 14-team league with nine rounds remaining.

San Jose vowed to give Arsenal a tough battle, notwithstanding their position in the current standings.

“I want to make our fans proud. We know we’re playing against a top team, but we must show them we also can play.  We need to be at our best both tactically and technically and our target is to try to play good football. We must try to give them a tough fight,” he added.

“The domestic competition is our focus, so we have to find the right balance when using players against Arsenal.  We are improving step by step. But, against Arsenal, we’re going to try our best and I’m sure the players are going to do their best.

“I expect the fans are going to enjoy it. I believe a lot of Al Nasr fans will come out but there will not be any dearth of support for Arsenal as well. It will be a beautiful scenario and atmosphere.”

In their 17 outings so far, Al Nasr have managed four wins, five draw and eight losses.