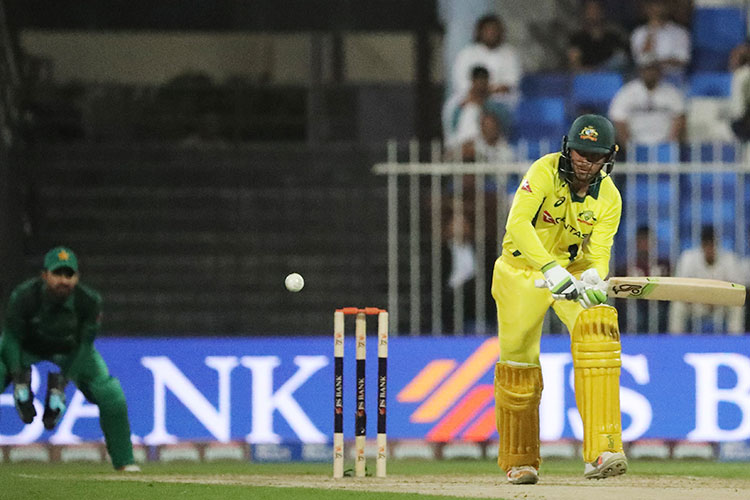 Usman Khawaja plays a shot against Pakistan during their second ODI match in Sharjah on Sunday. Agence France-Presse


Sharjah: Skipper Aaron Finch smashed a career-best   153 off 143 balls as Australia trounced a hapless Pakistan by eight wickets in the second ODI at the Sharjah Cricket Stadium on Sunday.

Chasing a fighting total of 284, Australia knocked down the winning run with 2.1 overs to spare to take 2-0 lead in five-match series.

Australia, who are in sublime form since winning ODI series against India, made a light work of Pakistan’s total.

Both the openers Finch and Usman Khawaja (88) toyed with the Pakistani bowling attack as the duo added 209 runs for the first wicket in 36 overs to all but end Pakistan’s hopes for a series-leveling win.

Khawaja hit eight boundaries where as Finch was more brutal, smashing 11 fours and 6 sixes during his stay at the crease.

Earlier, Mohammad Rizwan smashed his maiden century and shared a couple of big partnerships to propel Pakistan to a fighting total of 284/7 in their allotted 50 overs.

He dug deep to pull Pakistan out of the rut and added 127 runs for the fifth wicket with the captain Shoaib Malik (60) to take them to 239-5 from 112-4 before the latter was dismissed.

Pakistan were reeling at 112/4 with top four batsmen back in the pavilion and almost half the innings over. When the other were wilting under pressure and the inning was falling apart, Rizwan stood like a rock on the other end to ensure a fighting total on the board.

When Malik came to crease, Pakistan needed someone to stick around till the end. Both the batsmen knuckled down to the task of rebuilding the innings. With a dab here and din there, the duo kept Pakistan afloat, playing watchfully. However, Malik had made his intent clear as he dispatched Lyon for a six, early on in his innings.

Both Rizwan and Malik kept the scoreboard moving with single and couple, hitting occasional boundaries to maintain the run rate.

Once they crossed the milestone of 100 and 50 runs respectively, they started cutting loose. When on 48, Malik was dropped by Maxwell off Zampa as the ball raced to the boundary line and he reached another 50 of hid career. But he failed to capitalize on the missed chance and could add just 12 more runs to his total to be caught by Maxwell at the same place almost in the similar fashion. It was like a déjà vu, in his next Zampa again gave a little flight to ball, prompting Malik to hit him over the top. And Malik could not resist the temptation as he came down the track, trying to hit him for a six but failed to control the shot as an-ever agile Maxwell did not make any mistake this time around to get rid of Pakistani captain.

Earlier, JA Richardson produced a scintillating spell to push Pakistan on the back-foot from the beginning by rattling the stumps of Imam-ul-Haq for naught off the fifth ball of his first over.

Imam’s bad form with the bat continued as he did not look even a pale shadow of himself, who has an impressive average of over 50 in ODIs.

He found it difficult to adjust to length of the ball and there was barely any footwork during his short stint at the crease. In a bid to drive a straight delivery, he mistimed the shot and ball took an inside edge to go on to hit the stumps.

Shaan Masood also failed to better his previous best of 40 that he scored on his debut in the last match. But he did add a useful 35 runs for the second wicket with the first-match centurion Haris Sohail in a bid to anchor the innings.

When Masood was looking set to play a big innings having survived few anxious moments, he holed out to Marsh in the midwicket area.

He failed to read a slower delivery and was early on to the shot while trying to flick it to the boundary rope. The ball took the leading edge and popped up in the air and Marsh made no mistake to complete an easy and clean catch.

Pakistan needed someone to play a big innings and their batting line-up lacks depth with all their front-line players being rested.

However, a 52-run partnership between Sohail and Rizwan took the score to 87 in 17 overs before the former was caught by wicket-keeper Carey off Finch, who is a part-time bowler. While trying to steer the ball to the third wicket, Sohail edged it slightly and the ball landed in the safe hand of Casey.