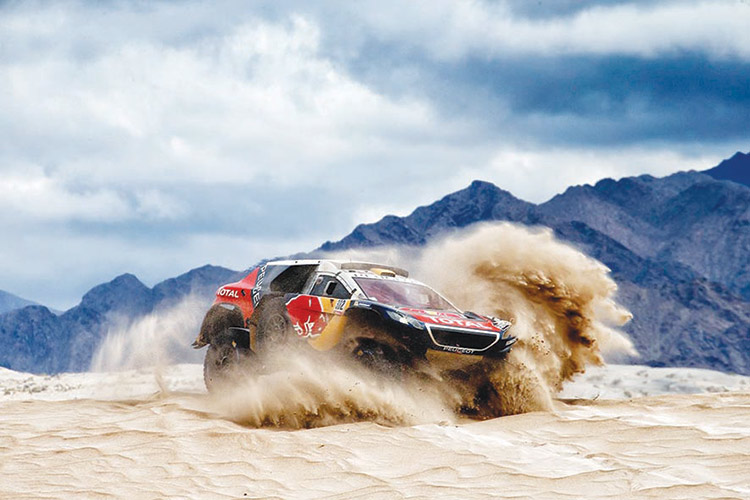 Stephane Peterhansel is among 39 drivers contesting the second round of the World Cup for Cross Country Rallies for cars, buggies. Supplied photo

Abu Dhabi: Stephane Peterhansel, the most successful competitor in the history of cross country rallying, will take his place in a star-studded line-up for the 29th edition of the Abu Dhabi Desert Challenge powered by Nissan.

Driving an X-raid Mini John Cooper Works buggy the Frenchman, who has won the event five times as a driver and once as a rider, will be partnered by his wife, Andrea Mayer, who has previously finished the rally on two and four wheels and returns as a navigator for the first time.

They are among 119 competitors from 34 countries in the official entry list issued on Sunday by the Automobile and Touring Club of the UAE (ATCUAE), the rally organisers, who are now busily preparing for the start on Saturday (March 30) at Yas Marina Circuit, the event’s official HQ.

From there the next morning 80 cars, buggies, bikes and quads will set off for five spectacular desert stages across the giant dunes and sabka plains of the Al Dafrah Region.

Peterhansel, who won the Desert Challenge bikes title in 1996 and secured the last of his five cars victories in 2011, is among 39 drivers contesting the second round of the 2019 FIA World Cup for Cross Country Rallies for cars and buggies. The line-up includes 16 T1 prototype vehicles.

Heading the seedings list are the top two from this year’s FIA World Cup standings after the first round in Qatar, Saudi Arabia’s Yazeed Alrajhi in a Toyota Hillux Overdrive and Russia’s 2014 and 2015 Desert Challenge winner Vladimir Vasilyev in a BMW X3.

Czech defending champion Martin Prokop is back at the wheel of a Ford Raptor RS, Poland’s Jakub Przygonski returns to action in the Mini John Cooper Works Buggy which took him to a second victory in a row in the recent Dubai International Baja while the UAE’s Sheikh Khalid Al Qassimi chases his second Desert Challenge triumph in his Abu Dhabi Racing Peugeot 3008 DKR.

Another Saudi, Khaled Al Feraihi at the wheel of a Nissan Patrol Pick Up, will be aiming to succeed fellow-countryman Ahmed Al Shegawi as winner of the T2 production cars category.

Starting his 29th consecutive Desert Challenge in a Nissan Pick Up is Yahya Al Helei, one of five drivers carrying the UAE flag. Spain’s Jose-Luis Pena Campo returns to UAE action in a Polaris looking to retain his buggies title.

Sam Sunderland, the 2017 Desert Challenge bikes champion, is the top seed among 41 riders for the opening round of this year’s FIM Cross-Country Rallies World Championship.

The most celebrated competitor in Dakar Rally history, with six bikes triumphs between 1991-1998 and seven cars victories from 2004-2017, Peterhansel first competed with his wife beside him in the 2016 Italian Baja - while on honeymoon.

Like her husband, Andrea progressed from bikes to cars in cross country rallying, finishing sixth in the 2001 Desert Challenge on a KTM and fifth in a Mitsubishi Pajero in 2013, a year before securing a top ten Dakar finish.

“Stephane and Andrea are great friends of the Desert Challenge and we’re very happy to welcome them back,” said ATCUAE President Mohammed Ben Sulayem, the FIA Vice President for Sport.

“They’re both fantastic competitors and it will be interesting to see how they complete as a team against some of the best driver / co-driver partnerships in the world.”

Following the 7.30pm ceremonial start at Yas Marina Circuit on Saturday, the powerful assembly of rally cars, buggies, bikes and quads heads out from Abu Dhabi for the first of five demanding desert stages in the Al Dafrah Region.

For five nights the 800-strong contingent of competitors, technicians, officials, medical staff, volunteers and media will be encamped at a purpose-built bivouac close to the Qasr Al-Sarab Desert Resort by Anantara.