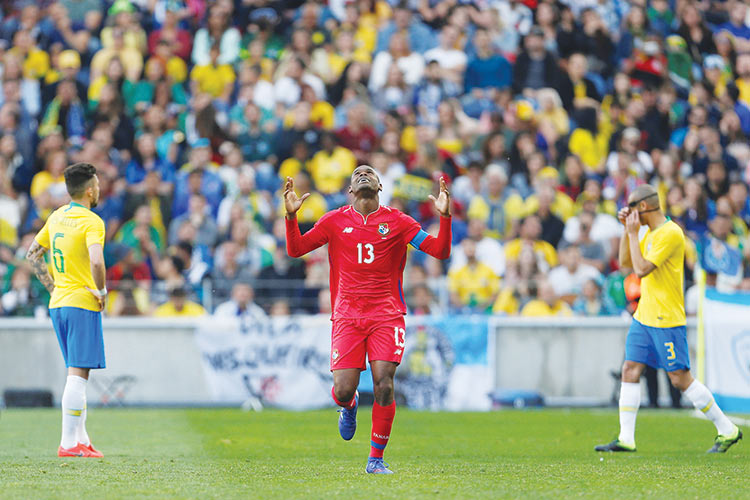 Panama’s Adolfo Machado celebrates after scoring against Brazil during their friendly in Porto on Saturday. Reuters

porto : Brazil were held to a 1-1 draw against Panama in an international friendly played at Porto’s Dragao Stadium on Saturday.

AC Milan’s Lucas Paqueta claimed his first international goal for the five-time World Cup winners before captain Adolfo Machado responded for the side in 76th place in the world rankings.

Injured Paris Saint-Germain forward Neymar watched the game from the stands as he recovers from a fractured right foot.

“The performance wasn’t brilliant but it wasn’t below par either,” coach Tite said.

“When we go to the Copa America we will make more accurate choices to be more efficient.”

The Selecao opened the scoring just after the half-hour mark.

Midfielder Paqueta was on the end of a deep Casemiro cross to volley home at the back post.

Skipper Machado brought the teams level four minutes later. Erick Davis’ central free-kick found the centre-back near the penalty spot who lobbed his long-distance header over a stunned Ederson who appealed for offside.

Everton attacker Richarlison came close to bagging his side’s second as his effort smashed the crossbar five minutes after the break.

Real Madrid’s Casemiro had two chances to win the game for Tite’s outfit with a header and a powerful shot with quarter of an hour remaining.

Both teams made a wave of substitutions in the closing moments and Eder Militao went close with an injury-time header.

Next for Brazil is Tuesday’s friendly against the Czech Republic as they prepare to host this year’s Copa America which starts on June 14.

Supporters of El Tri, frustrated to see the team failing to advance beyond the round of 16 at seven straight World Cups, hope that under the new coach, Mexico can at least reach the quarter-finals of the 2022 World Cup in Qatar, reports Efe news.

Martino, 57, led Paraguay to the World Cup quarterfinals in South Africa in 2010 and to the Copa America final the following year.

Much of the action in the first half of Friday night’s contest at Qualcomm Stadium in San Diego took place in midfield, while Mexico started brightly, the initiative shifted to the Chileans.

Arturo Vidal forced a save from Mexican goalkeeper Guillermo Ochoa in the 14th minute and Chile got another opportunity in the 23rd minute, when a giveaway by El Tri set up Nicolas Castillo to go for goal, but defender Hector Moreno was there to head the ball away.

Four minutes into the second half, Vidal threatened again, only to see his shot sail over the cross-bar. Mexico’s Raul Jimenez came close seconds later and put his side ahead 1-0 in the 52nd minute, converting a penalty after Chile’s Pedro Hernandez committed a foul in the area.

Andres Guardado could have doubled the advantage two minutes later, but fired wide.

Mexico were dominant as the match entered the final third and settled the contest with a pair of goals just two minutes apart: Hector Moreno headed in a corner in the 63rd minute and Hirving Lozano scored with an assist from Rodolfo Pizarro in the 65th minute. Castillo pulled back a goal for Chile in the 69th minute with help from Vidal.

El Tri will face Paraguay in a friendly next Tuesday, while Chile are set to play the United States.