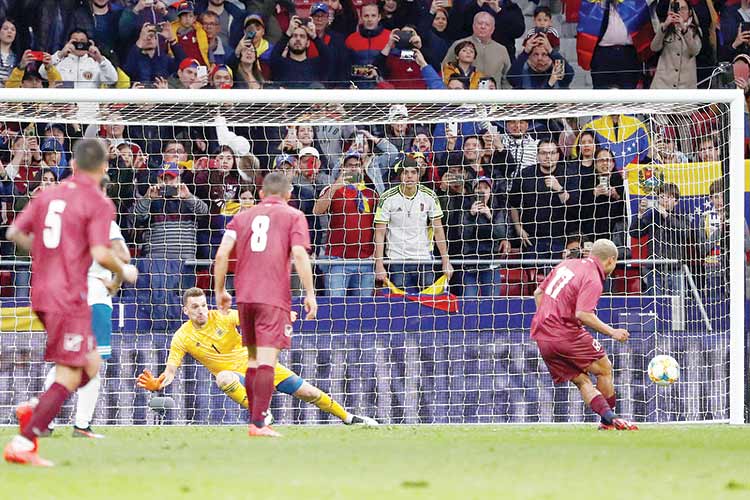 Venezuela’s Josef Martinez (right) scores against Argentina from the penalty spot during their friendly on Friday. Reuters

Madrid: Argentina suffered a shock 3-1 defeat to Venezuela on Friday as Lionel Messi made his first international appearance since the 2018 World Cup.

Barcelona star Messi meanwhile will miss Argentina’s friendly against Morocco next week after picking up a groin injury in Friday’s match.

Gonzalo Martinez has also been ruled out of the fixture in Tangier with a thigh problem.

Messi started the fixture following a self-imposed eight-month exile in which he missed six friendlies since the tournament in Russia, which they exited in the last 16 at the hands of eventual champions France.

Salomon Rondon and Jhon Murillo gave Venezuela a two-goal advantage at the break.

Argentina forward Lautaro Martinez halved the deficit before Josef Martinez scored from the spot to claim the spoils in the friendly played at Atletico Madrid’s Wanda Metropolitano stadium.

The pick of the goals came as 23-year-old Murillo scored for only a third time in 17 internationals.

He received the ball on the corner of the box, was given plenty of space by the Albiceleste defence and the winger fired home powerfully past Armani with a minute left of the first half Argentina’s Martinez gave his side some hope on the hour mark as Messi found Giovanni Lo Celso who played in the Inter forward to finish.

Rafael Dudamel’s side, ranked 32nd in the world, claimed a third after Martinez was tripped in the box.

The Atlanta United attacker skipped up to take the penalty, sending Armani the wrong way to score with 15 minutes remaining.

Next up for Argentina is a friendly against Morocco in Tangier on Tuesday as they prepare for this year’s Copa America, held in Brazil between June-July.

The friendly against Morocco on Tuesday comes as they prepare for this year’s Copa America, held in Brazil between June-July.