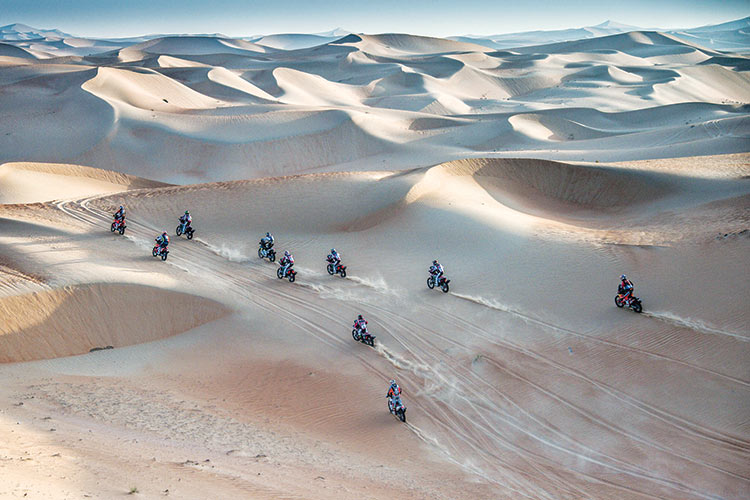 Sam Sunderland will be up against the strong line-up of riders for the opening round of FIM Cross-Country Rallies. Supplied photo

Abu Dhabi: When Sam Sunderland sets off in pursuit of a second bikes crown in the Abu Dhabi Desert Challenge Powered by Nissan, the British rider faces a number of battles over five days in the deserts of the UAE.

The Nissan Patrol is the official car for the event.

Sunderland, winner in 2017 shortly after capturing the Dakar Rally title, will be up against the cream of cross country rallying talent in a line-up of 41 riders for the opening round of this year’s FIM Cross-Country Rallies World Championship.

None of them know the demanding terrain better than the KTM star for whom Dubai became his adopted home 10 years ago, and when the rally breaks out in to the Al Dafrah Region on Sunday morning, no-one will be better prepared for the gruelling test ahead.

For bike and quad riders, particularly the amateurs sharing the stage with the world’s best, the threat of dehydration is ever present in the desert heat, with many facing the exhausting task of digging themselves free from the soft sand traps along the five-day route from March 31.

“All of our races are in extreme environments and it’s necessary to take care about your fluid and electrolytes, but I think most of the top riders have this under control,” said Sunderland, speaking from the KTM training camp in Morocco.

“It’s normally new riders that aren’t used to the heat or exertion for long periods of time that come unstuck. I’m in very good shape, which is important at the start of a new season, of course once you have won the race once it has to be your goal to do it again and that’s what I will be aiming for. We will just have to see how the strategy plays out without a prologue.”

Research carried out by the Automobile and Touring Club of the UAE, the rally organisers, in conjunction with Al Ain Water has spotlighted the risks, and effects of dehydration.

“Dehydration affects physical and mental performance, and even at low levels can have severe physiological effects. Side effects include poor concentration, co-ordination and reaction time and that can lead to accidents. So keeping competitors and volunteers hydrated is a major priority.”

With Al Ain Water stations set up along the five-day rally route, competitors, officials, and the volunteer marshals working out in the desert for hours on end never run short.

“This has been our mission for the past 14 years as the official supplier of Al Ain Water,” said Eng. Tariq Ahmed Al Wahedi, CEO, Agthia Group PJSC. “We’re proud of our record in making sure that everyone involved in the rally is properly hydrated throughout the five days.”

“I always tried to ride in the dunes the months before Abu Dhabi and it’s a very specific terrain and requires a different set up and riding technique than the other rallies,” said Sunderland. “We have just finished here in Morocco testing and training for Abu Dhabi.”

The Desert Challenge rider line-up has a family flavour, with the Dubai-based Irish father and son combination of David and William McBride trying to outdo each other again after William finished ahead in the recent Dubai International Baja.