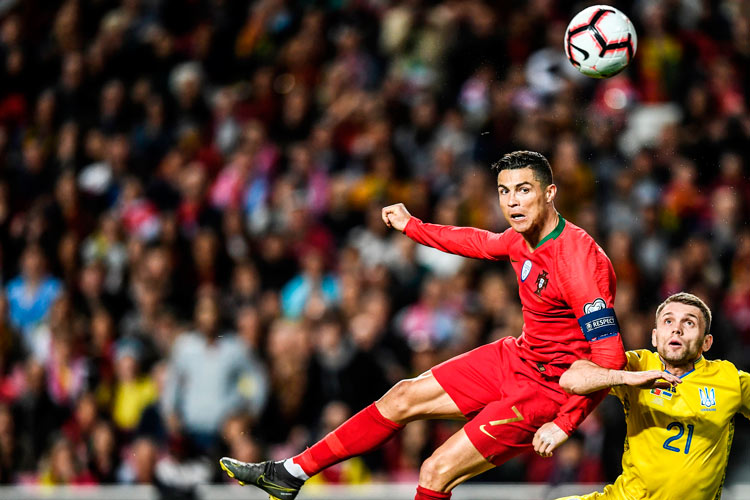 Lisbon: Ukraine snuffed out Portugal on Cristiano Ronaldo's return to international football, defending stoutly as they held the European champions to a goalless draw in their opening Euro 2020 Group B qualifier on Friday.

Ronaldo was handed the captain's armband by Portugal coach Fernando Santos for his comeback nine months since he last played for his country, in the 2018 World Cup, but the Juventus attacker couldn't help his side find a way past Andriy Shevchenko's stubborn outfit.

The draw was the first time Santos' side have failed to score at home in 19 matches and leaves them second in the group behind Luxembourg, who beat Lithuania 2-1.

"We didn't play as we wanted to. We started slowly, not pressing the way we wanted," said Manchester City midfielder Bernardo Silva.

"The second half we tried to create chances to go after the game but unfortunately we didn't score."

William Carvalho had a fine header ruled out for offside in the 16th minute and Ronaldo, Pepe and Andre Silva all went close to opening the scoring, but Ukraine stopper Andriy Pyatov was on fine form to deny them.

Ronaldo, who was rested for the last six Portugal games while he settled at new club Juventus, was one of the few players who looked like he had any idea of how to break Ukraine down, but he couldn't inspire his team to victory.

In the end the away side could have snatched the three points through Junior Moraes, only for the debutant to fluff a golden chance to grab a shock win.

"We fulfilled our gameplan in defence, 100 percent. Not conceding at the home of the European champions is a great result," said a satisfied Shevchenko.

"There were some stages in the game where we didn't do well. But Portugal were reshaping very well on the pitch and created us lots of difficulties."