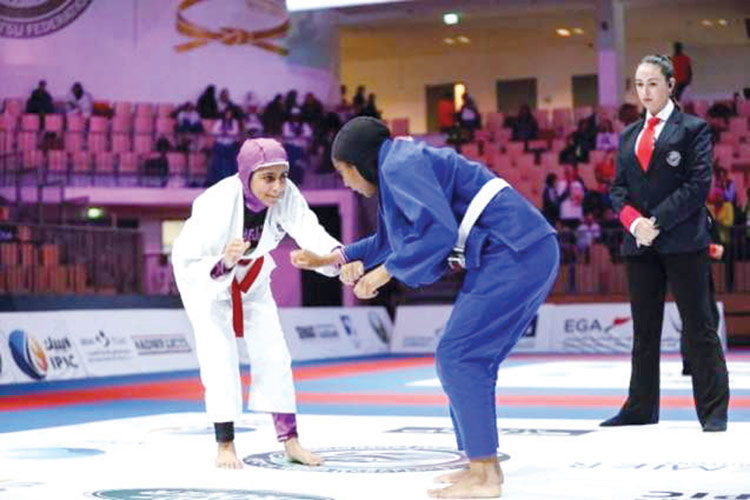 ABU DHABI: Under the patronage of His Highness Sheikha Fatima Bint Mubarak, Chairwoman of the General Women’s Union (GWU), President of the Supreme Council for Motherhood and Childhood, and Supreme Chairwoman of the Family Development Foundation (FDF), the UAE Jiu-Jitsu Federation will organise the third and final round of the Mother of the Nation Women’s Jiu-Jitsu Championship to be held on March 30.

The Mother of the Nation Women’s Jiu-Jitsu Championship consists of three rounds within the Federation’s annual plan for the 2017-2018 season, dubbed Year of Women to honour and qualify Emirati women in Jiu-Jitsu, support the national team with female players of all ages as well as the allocation of local championships to stimulate their participation in international forums and championships, where they have proven their ability and dedication in achieving the best results.

Held at Mubarak Bin Mohammed Sports Hall, the event is being organised for the first time with the support and patronage of Umm Al Emarat, in a move to encourage women from the UAE to participate and promote the presence of sports among different sectors of the society and those interested in promoting women.

The championship is held in accordance with the special preparations, where participation is limited to female athletes from the UAE, in the presence of female fans only, including VIPs from the sports community in the country, and selected female referees, in addition to the medical and technical staff.

UAEJJF Board Member Sameera Al Romaithi said: “We are thankful to our wise leadership for their continuous support of women’s sports, which demostrates the importance given to raising strong female athletes in the UAE.”