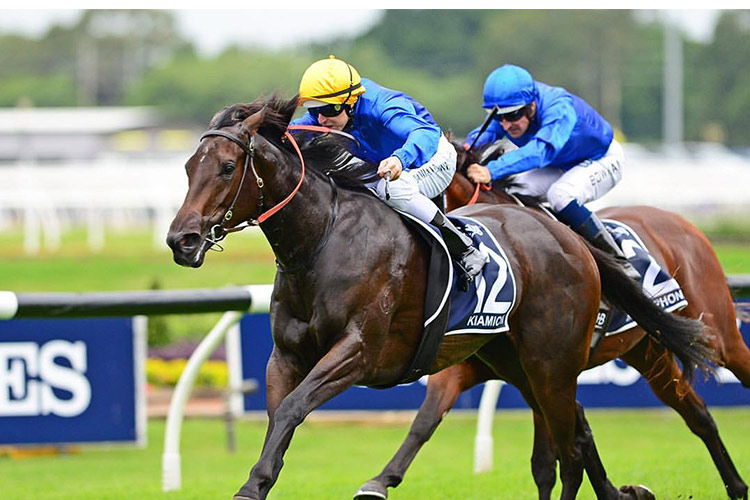 Dubai: An all-blue finish in the G1 Golden Slipper at Rosehill has given Godolphin another spectacular day in its greatest ever Australian season.

Kiamichi, an outsider in every sense, led home the Godolphin 1-2-3 in the world’s richest two-year-old race, jumping to the front and setting the speed to win by a length from her stablemate Microphone with Lyre a further half-length back in third place.

The win was the first for trainer James Cummings in a race that is one of Australia’s most important, and he made it all the more significant by preparing the first two home.

Champion Australian mare Winx extended her record-breaking win streak to 32 on Saturday in what is widely expected to be the penultimate race for the world’s top-rated turf horse.

Trained by Chris Waller, the best galloper on the planet comfortably won the 1500m weight-for-age George Ryder Stakes at Rosehill Gardens in Sydney, boosting her world-record Group 1 race victories to 24.

The seven-year-old was hot favourite on what is her home track -- close to where she is stabled and has trained for most of her career.

With long-time jockey Hugh Bowman in the saddle, she held back before hitting the front with 200m to go and storming to the finish line for another easy win ahead of Brutal and Dreamforce.

“I just crept her in closer and obviously I was a bit more assertive with her over the final 300m,” said Bowman.

The triumph handed Winx yet another record, and one which is unlikely to be equalled, of four successive wins in three Group 1 races — the Cox Plate, Chipping Norton Stakes and the George Ryder.

For Cummings the Slipper ranked as a triumph even before the field left the barrier, with five runners from his stable making it into the field of 16.

Of that group, Kiamichi was the outsider and her task was made even more difficult by her outside draw in barrier 14. But her trainer hadn’t dismissed her.

In November she was the stable’s first two-year-old winner. On Saturday she became Cummings’ 13th and the 15th for Godolphin in Australia this season. Between them, the Godolphin juveniles have won 25 races, including two G1s and the Magic Millions Classic.

Cummings said of Kiamichi: “She was our first two-year-old winner of the season, she had the heart to get up and win on debut and she’s just kept on improving,” Cummings said.

The Golden Slipper win was the ninth G1 Australian successes this season for the broader Godolphin team whose successes include the Melbourne Cup, Caulfield Cup and Caulfield Stakes.

Cummings also passed heartfelt thanks to Godolphin’s creator, Vice President and Prime Minister of the UAE and Ruler of Dubai His Highness Sheikh Mohammed Bin Rashid Al Maktoum, for whom he has now trained 11 G1 winners.

“Great thanks has to go to the vision of His Highness Sheikh Mohammed who put us in this position to lead a daughter of Sidestep home as the winner of the Slipper.”

The result was also a triumph for Sheikh Mohammed’s Darley stallions. Sidestep won three Stakes races for Sheikh Mohammed and stood at his New Sout Wales farm, Kelvinside. The runner-up Microphone is by the inimitable Exceed And Excel and third placegetter Lyre is by Lonhro.

The Slipper result followed the victory earlier on the same card of Avilius in the G1 Ranvet Stakes.

It was the first G1 success for the former French trained runner who has now scored seven wins in Australia, all in the current racing season.

It also came off the back of a disappointing effort in the G1 Australian Cup at Flemington two weeks earlier when he looked the winner only to fade into fifth place.