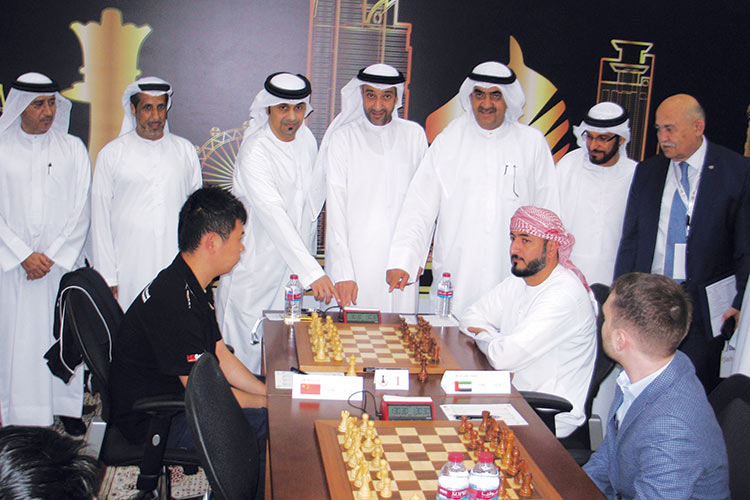 SHARJAH: Favourites ruled the opening of the third Sharjah Masters International Chess Championship at the Sharjah Chess and Cultural Club as 81 players scored wins in the first round.

The lone upset was by Woman Grandmaster Anastasya Paramazina of Russia over GM Sandro Mareco of Argentina.

The tournament is held under the patronage of His Highness Dr Sheikh Sultan Bin Mohammad Al Qasimi, Supreme Council Member and Ruler of Sharjah.

Prominent among those who were present during the ceremony were Talal Al Zaabi, Deputy Director of Sharjah Chess and Cultural Club, and Ragai Al Susi, Sharjah Chess Club executive manager, and other officials of the club.

While extending sincere thanks and appreciation to Dr Sheikh Sultan for his patronage and support to the championship, Sheikh Saud said: “The third edition of the Sharjah Masters features a very competitive field with top grandmasters from the world vying for the prestigious title.”

“This year the tournament is the strongest in terms of technical level, compared to the previous editions, with the participation of so many grandmasters whose rates are higher than the participants in previous years,” he added.

At stake is a total of $60,000 in cash prizes in the 9-round Swiss System tournament. A strong field of 178 players from 31 countries includes 33 Grandmasters, 32 International Masters and 15 FIDE Masters are taking part in one of the top tournament of the world.

Two Woman Grandmasters, seven WIMs and 7 WFMs round of the titled players. Indian players form the biggest contingent with 84 players followed by the UAE with 23 players.

In the lone upset in the first round, Paramzina, rated 2196, crushed the Sicilian Defense of GM Sandro Mareco of Argentina, highly rated at 2666.

Mareco had to give up a Knight on the 47th move to prevent pawn promotion. Facing mating threats he resigned on the 74th move.

Last year, seventeen-year-old Grandmaster Parham Maghsoodloo of Iran forced a draw with Yuriy Kryvoruchko of Ukraine in the final round to win with an amazing 8 points out of 9 rounds in the 2nd Sharjah Masters Chess Championship.