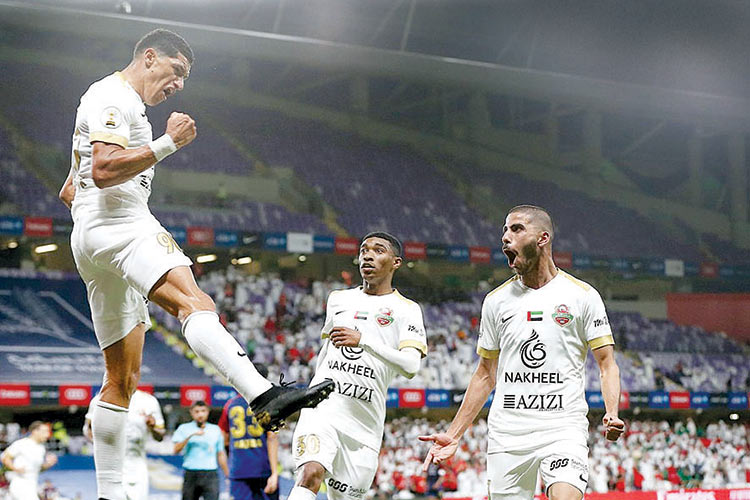 Shabab Al Ahli got off to a strong start with Mohamed Juma forcing Al Wahda’s keeper Rashed Alsuwaidi into a save, only three minutes after kick-off. Saud Abdelrazaq tried his luck 15 minutes later but was denied by Alsuwaidi.

On the half-hour mark, Shabab Al Ahli came close to finding the back of the net. Mohamed Juma found the ball on the edge of the box before dribbling past Al Wahda defender, but his close-range shot hit the woodwork.

The Clarets responded five minutes later. Right after coming on as a substitute for Abdulla Anwar, Sebastián Tagliabué passed the ball for on-rushing Ismaeil Matar whose strike was brilliantly saved by Majed Naser.

The final five minutes of the first were a very different story. Shabab Al Ahli finally broke the deadlock five minutes before the half-time whistle. An inch-perfect cross from Abdelaziz Salim Ali found Henrique Luvannor de Sousa inside the box, and the latter slotted home to give his side a 1-0 advantage.

Shabab Al Ahli’s lead, however, didn’t last long as Tagliabué leveled the scoreline in the dying moments of the first half. The Argentine forward sent a powerful strike from outside the box that nestled into the back of the opponents net. This marked Tagliabué fourth goal in the Arabian Gulf. Cup this season.

Ismail Al Hammadi tested Alsuwaidi in the 66th minute but the latter was alert as the game remained deadlocked at 1-1.

Shabab Al Ahli piled on the pressure as they searched for the winner in the remaining minutes. Alsuwaidi continued to impress as he denied Jaime Ayovi with four minutes to go, before saving Majed Hassan’s effort deep in injury time.

Neither side could find the winning goal in the closing stages, forcing the clash into extra-time.

Only five minutes after the restart, Shabab Al Ahli took a 2-1 lead. After capitalizing on a defensive mistake from Al Wahda defenders, Jaime Ayovi sent a close-range effort past Alsuwaidi to take his side a step closer towards the title.

As the Clarets were looking to net an equalizer, Shabab Al Ahli scored their third of the night to put the win beyond any doubt.

An impressive individual work from Ismail Al Hammadi saw him dribble past Al Wahda defenders inside the box before passing the ball to Mauro Diaz. Ayovi found the Argentine midfielder’s pass and slotted home his second of the night to make it 3-1 only two minutes into the second half of extra time.

To add insult to injury, Al Wahda were reduced to 10 men six minutes from time as Leonardo de Souza was sent off after being shown a second yellow card.

Al Wahda failed to become the first team to win the title for two years in a row, while Shabab Al Ahli won a record-extending fourth title.

Earlier, the route of each team to the final was very different. The Clarets advanced easily from the group stage and the knock-out stage, while Shabab Al Ahli struggled on their way to the final.

Both teams were drawn in Group A and clashed in the first round of the group stage in a game that ended in a 1-0 win for Al Wahda, thanks Leonardo da Souza’s winner.

Al Wahda maintained their positive performances as they defeated Al Wasl 3-0, beat Ajman 1-0 and overpowered Dibba 2-0. Their perfect start to the competition saw them collect 12 points in the first four matchweeks to seal an early spot in the quarter-final.

They were, however, held to a goalless draw with Bani Yas, before beating Ittihad Kalba 2-0 in their final group stage game.

They finished the group stage as Group A winners with 16 points, while scoring nine goals and keeping a clean sheet in all their games.