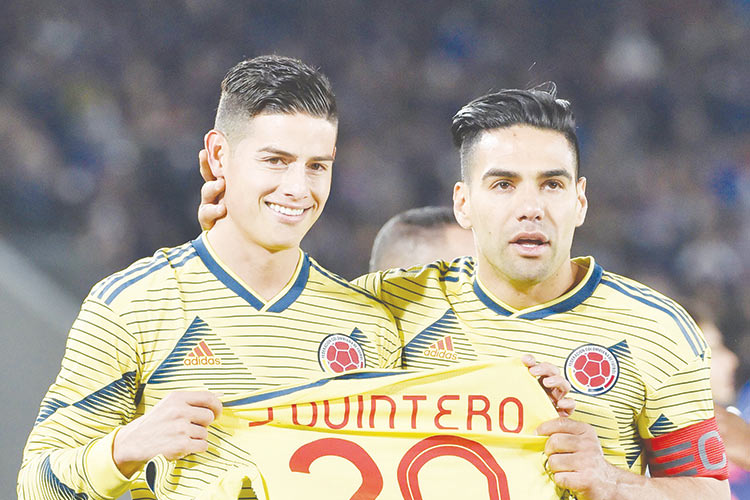 Colombia’s Radamel Falcao (right) and team-mate James Rodriguez celebrate their goal against Japan during a friendly on Friday. Agence France-Presse

Falcao’s 33rd goal for his country came after a penalty was awarded for a handball by Japan’s Takehiro Tomiyasu in the 64th minute in Yokohama.

Colombia’s triumph was a small measure of revenge for the defeat they suffered by Japan in the group stage of last year’s World Cup and gives former Iran boss Queiroz the perfect start to his tenure.

After Sebastian Villa struck the crossbar in the fourth minute for the visitors, it was Japan who were the better team in the first half, having a host of shots without really testing Colombia goalkeeper Camilo Vargas.

However, Colombia looked more comfortable with Queiroz’s system after halftime and had two goals disallowed, the first for handball and the second for offside, either side of Falcao’s winner.

Tomiyasu had a great chance to make amends for his handball 13 minutes from the end but headed straight at Vargas. The ever-lively Shoya Nakajima, one of the players to shine for Hajime Moriyasu’s side, also went close, clipping the crossbar with a long-range effort.

Colombia substitute Luis Diaz also hit the bar in stoppage time but it didn’t matter as they secured victory to continue their preparations for the Copa America in Brazil in June.

They next play South Korea on Tuesday, while Japan, as one of the two invited nations for the Copa, will have another chance to test themselves against South American opposition when they take on Bolivia. They are without captain Maya Yoshida and striker Yuya Osako, who are being rested as some European clubs have raised concerns about the amount of football their Japanese players have been participating in. The loss to Colombia was their 13th match since going out to Belgium in the last 16 of the World Cup in Russia.

Meanwhile, in the China Cup in Nanning, Uruguay brushed off the absences of Edinson Cavani and Luis Suarez to ease past Uzbekistan 3-0 on Friday and reach the final.

Oscar Tabarez’s World Cup quarter-finalists will face Thailand in Monday’s final after China’s 1-0 loss to the Thais in Thursday’s game.

The game was all but over as a contest midway through the first half, as in-form Girona striker Cristhian Stuani toe-poked a lob into the far corner.

Stuani wasted a great chance to add to his tally just before half-time when he slotted wide, but did complete a double eight minutes from time shortly after Pereiro had rattled the crossbar, getting in front of his marker to prod past Uzbek goalkeeper Sanjar Kuvvatov.

The 32-year-old former Middlesbrough player has now scored 19 goals for club and country this season.

Zardes shot from the top of the box deflected off an Ecuadorian defender and then sailed over the head of goalkeeper Alexander Dominguez.