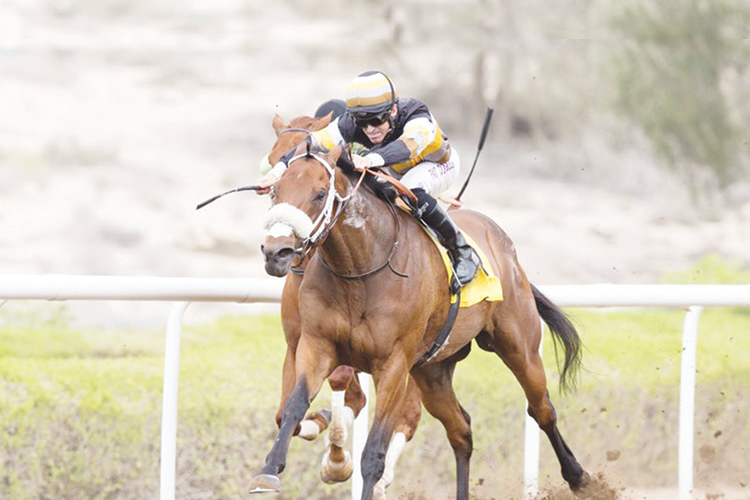 Dubai: The final and 11th meeting of Jebel Ali season was highlighted by the Jebel Ali Classic (Silver Jubilee), a 1400m conditions race and having won the inaugural edition in 2017, Shamaal Nibras regained the crown with a smooth success to maintain trainer Doug Watson’s record of landing the race each year, having also won it last year with Cosmo Charlie.

Settled nearer first than last by stable jockey Pat Dobbs, who was actually winning the race for the first time with Tadhg O’Shea aboard two years ago and Sam Hitchcott having ridden Cosmo Charlie, the 10-year-old First Samurai gelding crept closer at halfway before sent to the front at the 300m.

Bochart, soon in front under Richard Mullen fought well, but the veteran was always holding on, to the delight of Watson and owners EERC (Emirates Entertainment Racing), for whom he has now won six times. He also previously won last year’s Group 3 Jebel Ali Mile, the biggest race at the track all season. He was second in the same race this year before finishing third in the Listed Jebel Ali Stakes over 1950m.

Watson said: “I am delighted with that for everybody involved, especially the owners, as well as for my staff at home, because this is a real favourite in the yard and just a pleasure to train. He does seem to save his very best for Jebel Ali, but has won for us at Abu Dhabi twice and been placed there in a National Day Cup for the syndicate.”

EERC spokesman, Justin Byrne, added: “That is actually winner 80 for the syndicate and one of our best servants has achieved it which is perfect. We need to decide whether he stays here to race next season with two or three runs or, perhaps has a run in England and retires. We will sort that out later and enjoy today first!”

Jockey and trainer were celebrating a double an hour later after the inaugural running of a 3-year-old fillies’ conditions race in which they combined with Habah, previously a maiden after four starts but who had been competing in good company and, having not previously tasted victory, receiving weight from both Starry Eyes and Salayel, who chased her home. A daughter of Twirling Candy, she ran twice as a juvenile before finishing sixth in the Listed UAE 1000 Guineas after which she produced an even better effort when fourth, beaten six lengths, in the Group 3 UAE Oaks.

In the colours of Ali A Aneizi, Dobbs always looked confident with his filly, always travelling best before effortlessly taking the initiative with about 275m remaining, passing a stubborn Starry Eyes.

“She is a nice filly who has just kept improving, physically and mentally,” Dobbs said.

Eight went to post for a 1200m conditions contest but only one ever really mattered with High on Life and Royston Ffrench able to give weight and a sound beating to seven rivals. Having shot from the stalls, the 8-year-old gelded son of Invincible Spirit, trained by Salem bin Ghadayer, was untroubled and quickening clear with 350m still to run.

When O’Shea sent AF Al Jahed for home fully 700m out in the opener, a Purebred Arabian conditions race over 1800m, the race looked all over with the pair skipping many lengths clear with the prize seemingly theirs for the taking. However, having led from the outset, about 150m from the winning post the early exertions began to take their toll with eventual third, Dassan Da, closing fast down the centre of the track but never quite able to get there. Widest of all, Magic Number and Fernando Jara flew in the final 100m but, to the delight of O’Shea, riding for his main employer Khalid Khalifa Al Nabooda and trainer Ernst Oertel, the line appeared just in time.

Homebred by Al Nabooda, the 7-year-old was Shamaal Nibras regained the crown with a smooth success to maintain trainer Doug Watson’s record of landing the race each year, having also won it last year with Cosmo Charlie. Recording a seventh career victory, sixth on dirt and fourth at Jebel Ali where he was wining for the second time this year having also won over 1400m, from Dassan Da, on his penultimate start. Al Nabooda, almost guaranteed to be crowned champion owner for the season time, said: “This horse loves it here at Jebel Ali and, as I have been saying all season, I am very lucky to have Ernst Oertel as my main trainer.”