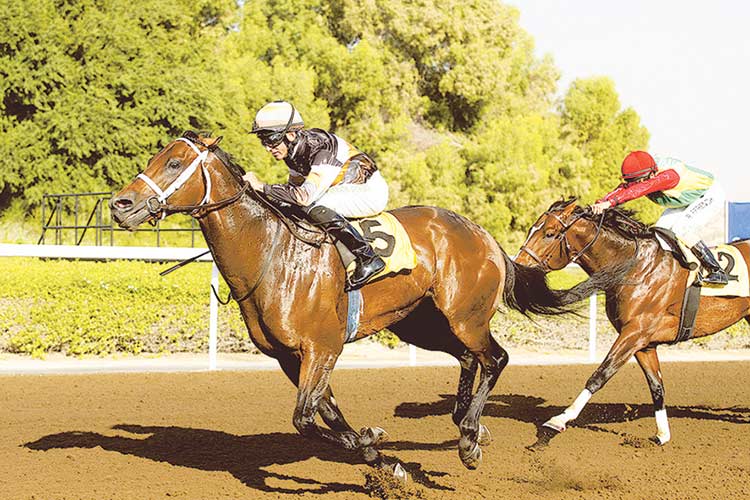 Shamaal Nibras with Pat Dobbs astride leads the field in the Jebel Ali Classic on Friday. Supplied photo

DUBAI: Having kicked off the UAE season in late October, Jebel Ali race for the 11th and final time this season on Friday when a seven-race card is highlighted by the Jebel Ali Classic (Silver Jubilee), a 1400m conditions race inaugurated in 2017 when won by Shamaal Nibras.

Trained by Doug Watson, as was 2018 winner Cosmo Charlie, Shamaal Nibras did not defend his crown last year, instead contesting the following week’s Group 2 Godolphin Mile. Also victorious in the 2018 Group 3 Jebel Ali Mile, he was second trying to retain that title this year before finishing a game third in the 1950m Listed Jebel Ali Stakes.

The choice of stable jockey Pat Dobbs, the 10-year-old is joined in the field by stable companion Mystique Moon, a course and distance winner on his penultimate start. He will be ridden by Pat Cosgrave.

Watson said: “Both are training very well and proven under the conditions, so we are hoping for big efforts from them in a competitive race.” Pinter has been a revelation for Erwan Charpy and Antonio Fresu, winning his four most recent starts, all at Jebel Ali. Two of those have been over 1200m, with the other two over Friday’s 1400m. The 7-year-old steps up in class here, but certainly arrives in great heart.

For Satish Seemar, Richard Mullen has chosen to partner Bochart, a course and distance handicap winner in March 2017 and twice successful over 1400m on the dirt surface at Meydan this season. Seemar also saddles local and dirt debutant, Ode to Autumn, like Mystique Moon, owned by Mohd Khalifa Al Basti. Only a 4-year-old, the gelded son of Showcasing won twice for John Gosden, both times on the all-weather surface at Newcastle, but has been off the track since the beginning of August, 230 days to be precise.

Sheikh Hamdan Bin Rashid Al Maktoum is responsible for four of the 13 runners and his retained jockeys, Jim Crowley and Dane O’Neill, have chosen to ride Takatul and Yaalail for Musabbeh Al Mheiri and Ali Rashid Al Rayhi, respectively.

International intrigue is added by Bold Rex, the mount of Adrie de Vries for South African Mike de Kock. Another making his dirt debut, the 5-year-old has been disappointing at Meydan this season, three times in Dubai World Cup Carnival handicaps, most recently in a non-Carnival handicap.

The main support race is the inaugural edition of a 1600m conditions race for 3-year-old fillies for which eight have been declared, including Salayel, trained on the Jebel Ali track by Nicholas Bachalard for racecourse patron, His Highness Sheikh Ahmed bin Rashid Al Maktoum. A daughter of Bated Breath, she was second over 1000m on her second and penultimate start before winning a 1200m maiden six weeks ago, both times on her ‘home track’ after a disappointing debut at Meydan. O’Shea comes in for the spare ride with stable jocke y Chris Hayes back in Ireland.

For Seemar and Mullen, Exchange Rate filly Lady Parma brings local Classic form to the table having finished third in the 1600m Listed UAE 1000 Guineas on her penultimate start before disappointing on her only subsequent outing, her turf debut, on her fourth career appearance.

Bhupat Seemar said: “She ran very well in the UAE 1000 Guineas, but had to miss the UAE Oaks sadly as she was in season. This is a nice new race and looks a good opportunity to give her another run and see how she handles Jebel Ali.”

Sixth in the UAE 1000 Guineas and then fourth in the UAE Oaks, Habah remains a maiden after four attempts for Doug Watson, but the daughter of Twirling Candy is the one to beat on official ratings.

This Jebel Ali Friday meeting is the final UAE fixture before next Saturday’s $35million Dubai World Cup card, the most valuable race meeting on the planet, next Saturday.