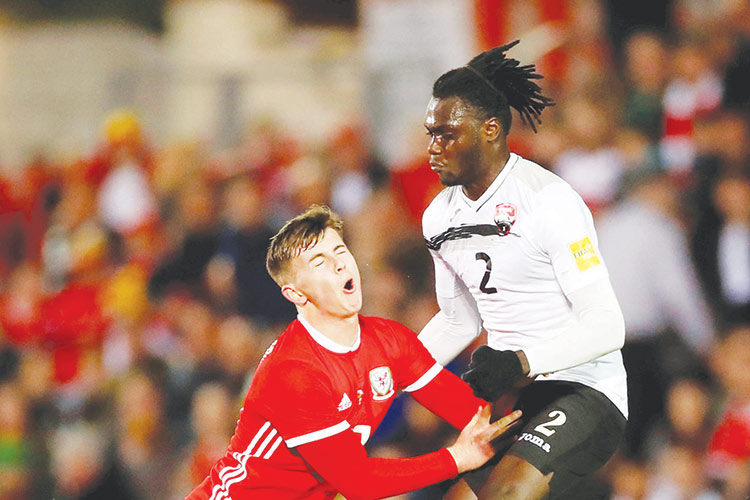 Wales’ Ben Woodburn in action with Trinidad and Tobago’s Aubrey David during a friendly match on Wednesday. Reuters

Berlin: Leon Goretzka spared coach Joachim Loew a humiliating defeat with a second-half equaliser as a new-look Germany side were held to a 1-1 draw in Wednesday’s friendly against Serbia.

Having controversially dropped veterans Jerome Boateng, Mats Hummels and Thomas Mueller from the national squad two weeks ago, coach Loew had announced the beginning of a “new era” ahead of Wednesday’s game.

“I was generally happy with the performance. You could see that there were a few communication problems, but that is something which improves with experience at this level,” Loew told German broadcaster RTL after the game.

The young Germany side looked comfortable in the opening exchanges, but Serbia scored with their first chance on 12 minutes.

A fortunate deflection at a corner found Luka Jovic unmarked in front of goal, and the Eintracht Frankfurt striker nodded the ball past Manuel Neuer.

Germany brought on Marco Reus and Leon Goretzka in the second half, and set about grinding down a solid Serbian defence.

On the odd occasion Germany did break through, Serbian goalkeeper Marko Dmitrovic frustrated the hosts with strong saves.

But after Leroy Sane and Ilkay Gundogan failed to take chances, Goretzka equalised on 69 minutes, lashing the ball past Dmitrovic from the edge of the box.

“Generally, when we have the ball on the wings, I try to find space between the penalty spot and the edge of the area, and on this occasion I struck the ball really well,” Goretzka told RTL.

Serbian forward Milan Pavkov was sent off late in the game for a dangerous challenge on Leroy Sane, but the Germany and Manchester City player confirmed that he had not been injured.

Germany will open their Euro 2020 qualifying campaign when they face the Netherlands in Amsterdam on Sunday.

Wales needed a stoppage-time goal from Liverpool teenager Ben Woodburn to beat Trinidad and Tobago 1-0 in friendly on Wednesday after Ryan Giggs left Gareth Bale out of the home side in Wrexham.

Bale was one of several players, including Aaron Ramsey and David Brooks, omitted by Wales manager Giggs just days before the team begin their Euro 2020 qualifying campaign against Slovakia in Cardiff on Sunday.

Trinidad and Tobago are ranked 93rd in the world — 74 places lower than Wales —  yet it seemed they might be rewarded with a highly creditable draw at a Racecourse Ground where their manager, Dennis Lawrence, played for Wrexham.

The last match between the two countries had seen Bale become Wales’ youngest player at 16 years and 315 days in a victory over Trinidad in Austria in a 2006 friendly.

Trinidad nearly took the lead when Aubrey David’s shot was cleared off the line by Chris Gunter.