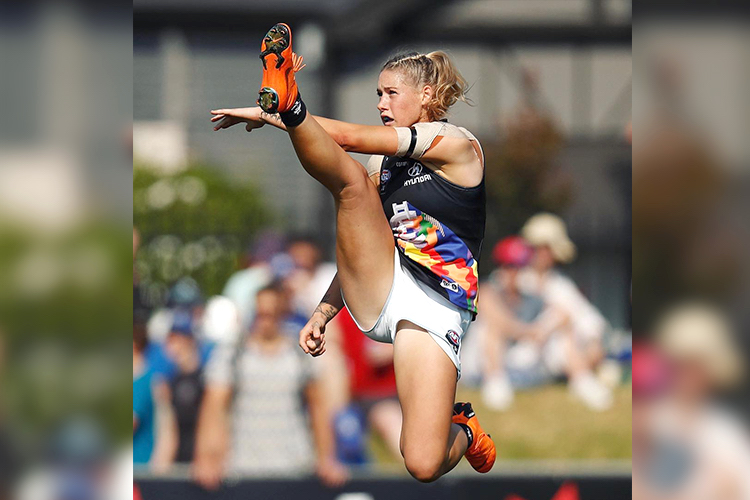 Tayla Harris tweeted a picture and captioned it, ‘Here’s a pic of me at work... think about this before your derogatory comments, animals.’

SYDNEY: A leading Australian Rules player has been praised for her courage after she slammed online trolling of an action shot of her kicking a goal as "sexual abuse."

Tayla Harris lashed out after the athletic image of her playing for the Carlton Blues attracted a series of derogatory comments on social media this week.

"The comments I saw were sexual abuse, if you can call it that, because it was repulsive and it made me uncomfortable," Harris told reporters.

"That is what I would consider sexual abuse on social media."

The Seven Network, a broadcast partner of the sport, had posted the shot of Harris on its dedicated AFL social media channels but took the image down on Tuesday night in response to a flood of "inappropriate and offensive" remarks.

But this sparked even more outrage, with several high-profile spokespeople reposting the photo in solidarity with Harris.

"The problem was not the photo," tweeted Australian women's football captain Sam Kerr, with Seven subsequently putting it back up and apologising for having "sent the wrong message".

Minister for Women Kelly O'Dwyer said she was "disgusted" by the trolling.

Aussie Rules, a dynamic game similar to Ireland's Gaelic football, has traditionally been male-dominated, but a women's league was launched in 2017 and has attracted large, and growing, crowds.

AFL chief executive Gillon McLachlan said he would not allow the women's game to be dragged down by the few.

"There is a minority of views in so many pockets of our game, but we are on the front foot and proud of what we're doing and we drive forward," he told the Sydney Daily Telegraph on Thursday.

"Obviously we are disappointed and think it's unacceptable, but we don't worry about that. We drive forward and issues like the last 24 hours help create the momentum and stamp out that mindset."

Nine media cited AFLW boss Nicole Livingstone as saying she hoped the outcry would be "a turning point for AFLW, in terms of respecting women and female athletes."