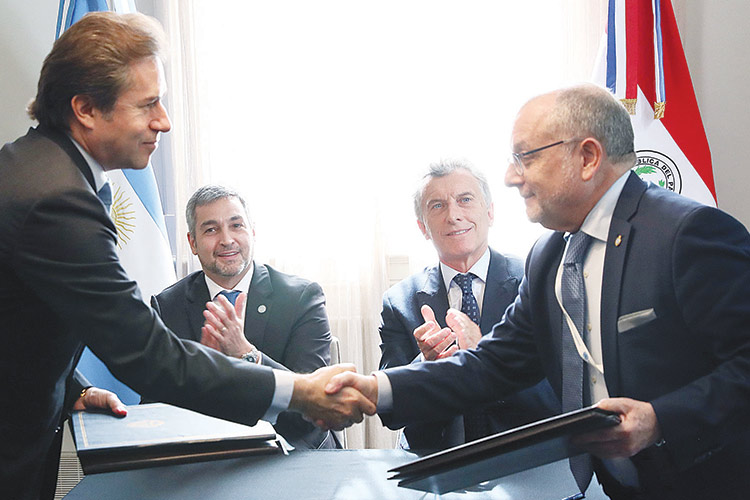 Delegates of the bidding countries shake hands after the meeting. Agence France-Presse

Buenos Aires: Argentina, Chile, Paraguay and Uruguay relaunched their bid to host the 2030 World Cup following a meeting of their presidents in Buenos Aires on Wednesday.

The four national presidents committed to creating a local organizing committee with a representative from each country to coordinate with CONMEBOL, South American football’s governing body.

The first meeting will be in Buenos Aires on April 8. They also decided to distribute the opening match, two semi-finals and final between the four potential hosts. Argentina and Uruguay originally announced their intention to submit a joint bid in 2017 before Paraguay joined the coalition later that year.

Chile was added to the joint candidacy last month while Bolivia, led by football-mad President Evo Morales, has also shown an interest in forming part of the bloc. Argentina’s Mauricio Macri, Sebastian Pinera of Chile, Paraguay’s leader Mario Abo and Uruguay president Tabare Vazquez met with CONMEBOL chief Alejandro Dominguez on the margins of the UN summit on South-South cooperation in the Argentine capital.

“We want to consolidate this idea and start to work on delivering the objective that the World Cup in 2030 is played here in the country and in the continent where it was born,” Dominguez said.