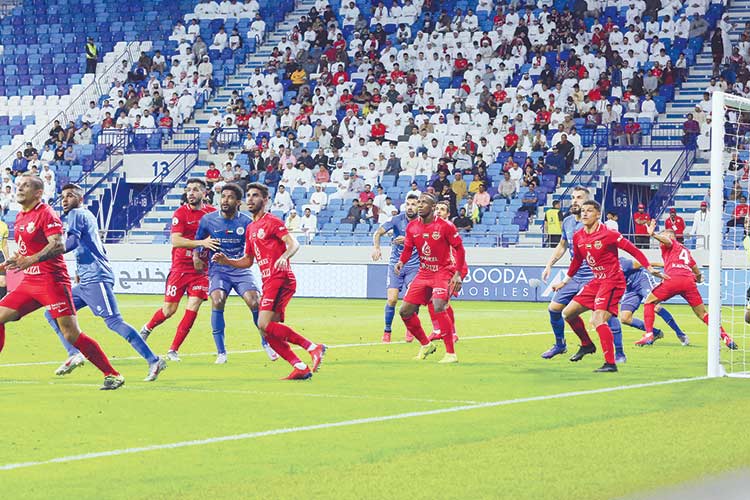 Shabab Al Ahli striker Ahmed Khalil believes the entire squad is fully aware of the size of the task ahead of their side’s Arabian Gulf Cup final against Al Wahda.

Dubai : The 11th edition of the Arabian Gulf Cup is coming to an end, with the final game between Shabab Al Ahli and Al Wahda set to be held on Friday at Hazza Bin Zayed Stadium.

Al Wahda and Shabab Al Ahli dominated the competition in the last five editions, except for the 2014-15 season which saw Al Nasr win the title.

In the semi-final, Shabab Al Ahli had a tough task against Al Nasr, as they played out a 0-0 draw, forcing the game into extra time. As they drew 1-1 in extra time, the game came down to a penalty decider, which saw Shabab Al Ahli booking spot in the final.

If the Clarets win, they will equal Shabab Al Ahli’s record of three titles and will be the first team to win the title for two years in a row. However, if Shabab Al Ahli emerge winner, they will extend their record to four titles.

Shabab Al Ahli striker Ahmed Khalil believes the entire squad is fully aware of the size of the task ahead of their side’s final against Al Wahda.

The striker is hopeful Shabab Al Ahli can get the win at Hazza Bin Zayed Stadium in Al Ain to win their first trophy in two years.

Khalil explained that Shabab Al Ahli have a set of objectives for the season they are still working to achieve, calling on his colleague to work as a unit and unite their efforts in pursuit of their objectives, starting with the Arabian Gulf Cup title.

The UAE international revealed that the players had vowed at the start of the season to return the club to its former glory days, insisting that reaching the final is an important step and promising to put in a strong and focused performance alongside his teammates to bring joy to the fans.

Khalil sent a message of gratitude to the club faithfuls who stood behind Shabab Al Ahli through thick and thin, crediting their constant support for the team’s run to the cup final.

The 27-year-old concluded by expressing his wishes that club return to silverware this season with more than one title still to play for, insisting that Shabab Al Ahli is a big team that belongs at the top.

Shabab Al Ahli faced several challenges in the early weeks of the 2018-19 season.

After finishing in fifth place last season, the Dubai-based side had high hopes of finishing in a better position to secure a spot in the AFC Asian Champions League next season. However, they ended up dropping a lot of points in the early stages of the league campaign.

Shabab Al Ahli collected six points only from their first five league games, winning two and losing three. In the Arabian Gulf Cup, they lost to Al Wahda before beating Al Wasl in the second matchweek.

Following the poor run of results, the club board decided to sack Luis Sierra and appointed Rodolfo Arruabarrena instead.

The Argentine coach had a good experience in Emirati football as he previously managed Al Wasl before leaving to join Qatari side Rayyan last season.

Meanwhile, Al Wahda defender Hamdan Al Kamli stressed on the importance of his side’s next match against Shabab Al Ahli.

Kamali said the Clarets’ players are eager to win and gift their supporters the title, adding that the club aim to extend their recent run of successes which saw them win five trophies over the past three seasons.

The defender believes the faith coach Henk ten Cate puts in the players has made them stronger as a team.