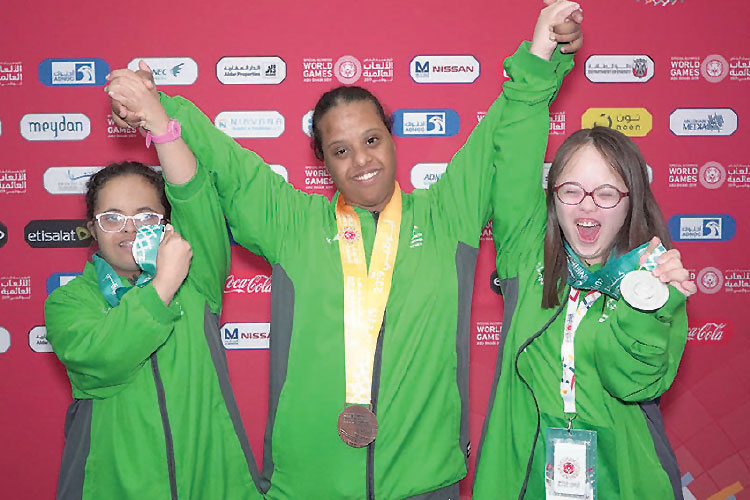 UAE’s Khalifa Al Amiri clinched gold in the men’s long jump M18 with a leap of 5.06 metres at the Police Officers Club on Tuesday.

Marcel Diessongo of Burkina Faso claimed silver with 4.82 metres while Togo’s Elom Kwami Bakpo was third with a jump of 4.23 metres.

Another silver for UAE came in the M17 long-jump category when Khalid Al Hajeri finished second behind Said Razzouq (3.94 metres) of Morocco with a jump of 3.85 metres. The bronze was bagged by Poland’s Wojciech Simlat with 3.68 metres.

UAE’s unified male-mixed team avenged their first-round loss to Russia with a 29-19 win in the semi-finals at the ADNEC Basketball Arena on Tuesday.

They will be face Puerto Rico in the final. Meanwhile, day four of the Special Olympics World Games Abu Dhabi saw another strong performance by Saudi Arabia’s athletes, with Abdulaziz Al Harthi winning the event’s first gold medal in swimming. Saudi Arabia won three gold, one silver, and three bronze medals on March 18. Harthi, 17, from Jeddah, was thrilled to win gold in the men’s 25m freestyle swimming event. Earlier in the week, he won a silver medal as part of Saudi Arabia’s 4x100m freestyle relay team. “I was inspired by my team-mates winning medals in the races before me,” he said.

Faisal Algosaibi and Faris Khouj, also part of the 4x100m freestyle relay team, each won bronze in their division of the 25m freestyle swimming.

The Saudi Arabian athletes also did exceptionally well in athletics events. Mohammed Alolayan won gold in the 5,000m run event, marking his second medal since he won a bronze in the triathlon event held on March 8.

Moayed Aldarwish won gold in the 400m run event. Moayed, 29, finds being at the World Games to be inspirational. “There are so many people here from all over the world, so many great athletes. Seeing everyone competing hard on the track is exciting, but it’s good that everyone is friends off the track too. We’re all the same: we all want to win and we want to make everyone proud.”

Meanwhile, Jitendra Patwal faced struggles in his preparation for Special Olympics World Games that would make most athletes give up on their dreams.

The Special Olympics Team Bharat (India) athlete comes from a background where finding money for daily necessities often outweighs the need for sporting essentials such as running shoes.

However, despite his family’s struggles, the 19-year-old has been able to achieve his goal of representing his country at the biggest sporting and humanitarian event of the year.

At the World Games, Jitendra not only ran for Bharat, but also won gold in the 200 meter race in his division at Dubai Police Stadium on Sunday.

Jitendra said he had been training hard for a month ahead of the event and is feeling on top of the world after winning the gold medal, which he dedicated to his parents.

“Despite his struggles, Jitendra never gave up his hope of participating in the World Games and eventually ended up winning the gold,” said his coach, Harish.