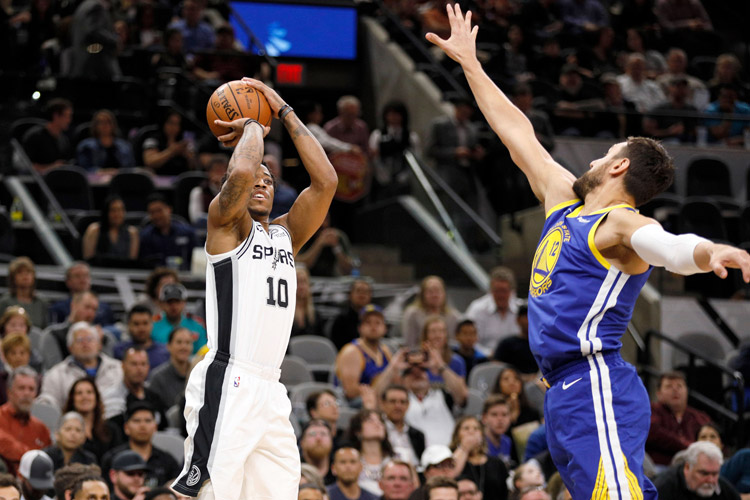 The Spurs won their 11th consecutive home game and improved to 42-29 on the season.

“We worked very hard. They are the defending NBA champs and they move and cut better than anybody in the world. The effort was there for 48 minutes and we learned a lot,” said Spurs coach Gregg Popovich.

Rudy Gay added 17 points for the Spurs, while Derrick White and Patty Mills hit for 12 and 10 points.

Stephen Curry led the Warriors with 25 points, and Kevin Durant returned from a two game injury absence to score 24 points for the Warriors.

“We had a couple of breakdowns at crunch time,” said Curry. “We fought hard and they just made shots down the stretch.”

Klay Thompson added 14 and Draymond Green racked up 10 points for Golden State, who dropped to 47-22 on the season and are now tied with Denver for top spot in the Western Conference standings.

The Spurs defence has been a catalyst during their winning streak. But when asked what the Spurs did to bottle up the Warriors, Thompson said, “Absolutely nothing. We just missed shots.”

Australia's Andrew Bogut, who signed with the Warriors on March 6 after playing this season in the Australian National Basketball League, made his season debut for the Warriors. Bogut played 10 minutes and finished with seven points and seven rebounds.

“He looks good. He is a big help,” Curry said of Bogut.

The Spurs took a four point lead at the end of the third quarter then cruised from there, leading by as much as nine points in the fourth.

Davis Bertans' nailed a three-pointer with just under two minutes to play to give San Antonio a 109-102 lead.

Elsewhere, Nikola Jokic had 21 points and 13 rebounds and the Denver Nuggets punched their ticket to the postseason by rallying past the Boston Celtics 114-105.

Will Barton added 20 points for Denver, which has won four straight. The Nuggets improved to 47-22 on the season and are tied with Golden State for the best record in the West.

The Nuggets won 46 games last season, but missed the playoffs after losing in overtime to Minnesota on the final day of the regular season.

Also, Kyle Lowry posted 15 points before he was forced to leave the game with an ankle injury as the Toronto Raptors clobbered the New York Knicks 128-92.

Eight Raptors finished in double figure scoring as they rolled over the Knicks for their fourth win in six games.

In Dallas, Elfrid Payton became the fifth player in league history to record a triple double in five consecutive games as the New Orleans Pelicans beat the Dallas Mavericks 129-125 in overtime. Payton finished with 17 points, 10 rebounds and 11 assists.

Mavericks Dirk Nowitzki passed Wilt Chamberlain for sixth place on the all-time scoring list, finishing with eight points to give him 31,424 in total.