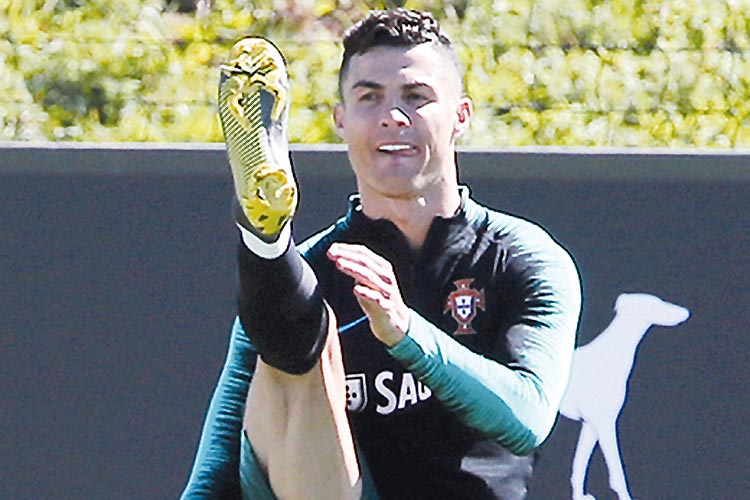 Cristiano Ronaldo stretches during a training session of the Portuguese team in Oeiras on Tuesday. Associated Press

Cristiano Ronaldo rejoined his Portugal team-mates on Tuesday ahead of the start of Euro 2020 qualifying this week following a nine-month absence from the national team.

The 34-year-old Juventus forward was recalled by Portugal coach Fernando Santos for games at home to Ukraine and Serbia, having not played for his country since the 2018 World Cup.

Ronaldo was rested for the last six Portugal games while he settled at his new club following his departure from Real Madrid last July.

The reigning European champions, who are through to the UEFA Nations League final in June, kick off their Group B campaign in Lisbon on Friday against Ukraine before facing Serbia on March 25.

“Cristiano adds quality to any team. It’s a pleasure to play with him and he’s very important for us,” Portugal defender Joao Cancelo, Ronaldo’s team-mate at Juventus, told reporters on Tuesday.

Meanwhile, Germany coach Joachim Loew hopes to prove his critics wrong and open 2019 with a win when his new-look team host Serbia in a friendly in Wolfsburg on Wednesday.

Loew, who arrived in Wolfsburg later than expected due to a dental operation this week, is hoping to bounce back from a painful 2018, in which Germany suffered an early World Cup exit and were relegated from the top tier of the UEFA Nations League.

The friendly against Serbia is a warm-up for Sunday’s prestigious opening Euro 2020 qualifier away to the Netherlands with the Germans hunting revenge after a 3-0 thrashing at the hands of the Oranje last October at the Amsterdam Arena.

Amid fears that German football is in decline, the 59-year-old Loew is under pressure to show that he can build a new era of success around a younger generation of players.

Yet he has also faced fierce criticism for his decision to strike veteran World Cup winners Mats Hummels, Jerome Boateng and Thomas Mueller from the national team set-up, falling offside with their club Bayern Munich in the process.

The controversial call has been seen as a gamble, which has heightened the pressure ahead of Wednesday’s game.

Yet the Germany boss has insisted that the right conclusions have been drawn from the failures of last year.

“(Hummels, Boateng and Mueller) are all World Cup winners and great players, so the decision was always going to be debated,” said Loew on Tuesday.

“But we are facing a new challenge. As I have said before, we need to be quicker, more dynamic and more ambitious.”

Loew has given three young players their first international call-up.

“We need to give the young players the feeling that they have our complete and total trust,” said Loew.

Loew has confirmed that Neuer remains his first-choice goalkeeper, but said that Barcelona stopper Marc-Andre ter Stegen would get a chance to prove himself in the coming months.