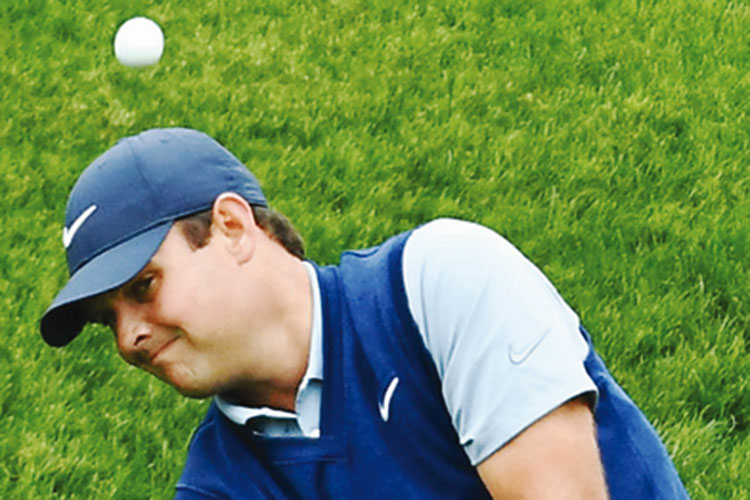 Patrick Reed chips on the ninth hole during the final round of The Players Championship golf tournament in Florida on Sunday. Reuters

Patrick Reed says he’s mentally stronger with better shotmaking entering the Masters than he was last year when he won the green jacket, even if his results don’t show it.

The 28-year-old American will defend his first major title at next month’s 83rd Masters tournament, but so far he hasn’t managed a top-10 showing since sharing second in November at Dubai.

“It definitely would help,” Reed said of a strong result during a Monday teleconference.

“But honestly I feel like the state of mind I’m in right now is better than it was last year at this point.

“I’m doing things on the golf course I feel more comfortable doing than last year. I just need to go out there and put four rounds together.”

Reed, now 16th in the world rankings, reached Augusta National last year after sharing second at the Valspar Championship and seventh at the Arnold Palmer Invitational plus a share of ninth at the WGC Match Play.

This month, Reed shared 50th at the Palmer and 47th last week at The Players Championship after a final-round 78.

“The preparations are going really well. I feel like I’m in a better place than I was last year at this time,” Reed said. “The thing is to keep building on what we’ve been working on.

“Just being able to work the ball both ways, consistently hit golf shots and put myself in a mind frame -- that’s what you need to compete at majors.”

But Reed was unfancied last year as well when he outdueled McIlroy, Jordan Spieth and Rickie Fowler to capture the title.

“One of the greatest tests in the game is playing in the Masters because you have to do everything almost perfectly,” Reed said.

“Augusta doesn’t only challenge your golf game, it challenges your body physically and tests you mentally.” Reed yearns for the Masters champion duties, having had his Champions Dinner menu set since age 13 -- ribeye steak, macaroni and cheese with creamed corn and spinach.

“I can’t wait to get back on the property, walk around the grounds and go into the champions locker room and look at all the names there,” Reed said.

“This year, having all the extra activities going on, I think it’s going to be a lot of fun. To experience what it’s going to be like on the first tee as defending champion, I can’t wait to see what that feels like.”

The last time Reed was on that tee, last year’s final round, he was unsettled.

“I felt the butterflies going,” he said.

“Once I got up to that iron shot, the nerves went away. I got myself in the right mind frame after that one shot.”

Reed says his best moment in the green jacket was being hugged by his daughter minutes after the victory, and his least favorite will be handing it back to Augusta National officials.

“That’s going to give me motivation to try and repeat and win multiple,” Reed said.

“It has just given me motivation. It kind of picks me up.” Reed says one key he has learned from Augusta National is that even the best players never stop learning around the famed course, saying he would tell his younger self to “hit more fairways and leave the ball below the hole.

“You just learn new things about the golf course year in and year out,” Reed said.

“It’s like every tournament you play but more penalizing times 100. “You just have to make sure you’re really sharp in every part of your game.”