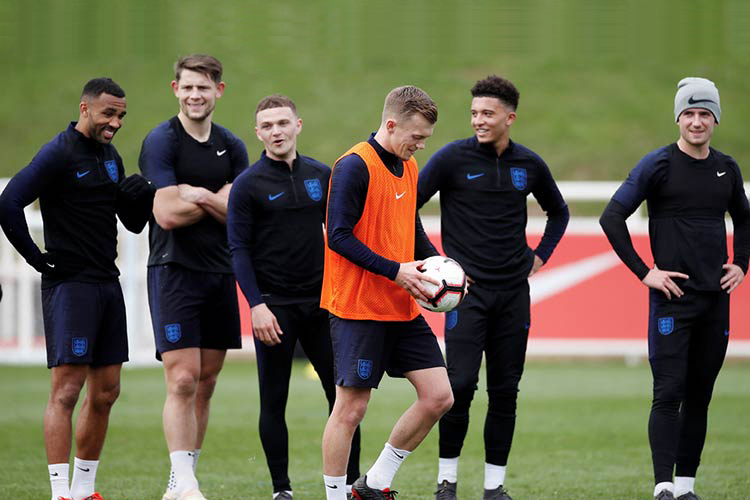 England captain Harry Kane insists the Three Lions’ squad are too united to be divided by the tension of club rivalries surrounding the Premier League title race and upcoming Champions League ties.

Four English sides have reached the last eight of the Champions League for the first time in a decade with Tottenham striker Kane set to face a host of international team-mates who play for Manchester City three times next month in two legs of a quarter-final and a vital Premier League match.

City and Liverpool are vying for the Premier League title, while Spurs face competition from Manchester United, Arsenal and Chelsea for a top-four finish.

However, unlike England camps of old where club rivalries led to factions forming on international duty, Kane believes Gareth Southgate’s squad will not be distracted ahead of Euro 2020 qualifiers against Czech Republic on Friday and away to Montenegro on Monday.

“We put that to one side, even the Liverpool and City boys. When we are here it is 100 percent England and when we go back I’m sure there will plenty of text messages and group messages flying about,” said Kane on Tuesday.

“We’ve got a great bond here and at the end of the day we are good friends.

“Whether we play for one club or another, when we come here we get on very well.

“Of course when we are back at our clubs we try 110 percent to try and beat each other but we have that respect for each other that we can talk afterwards and be friends.”

After a run to the last four of the World Cup last summer and qualifying for the Nations League semi-finals to come in June, England are one of the favourites to win the European championships next year.

Wembley will host the semi-finals and final of that tournament, while England will also play their group games on home soil should they qualify.

And Kane admitted that is extra motivation as the qualifying campaign gets underway on Friday.

“It is a great incentive to have the opportunity to play in a European Championship where we could have quite a few games at Wembley,” he added.

“It is exciting. People expect us to qualify and they think it is going to be an easy group but it is never that easy.

“We have to go and be professional. Of course we back ourselves to go through but we still have to go and do it. It is important we start well and hopefully build on that.”

At 25, Kane is one of the senior members of Southgate’s squad with Declan Rice and Callum Hudson-Odoi winning their first call-ups to add to a growing pool of young talent.

Rice has switched his allegiance to the country of his birth after playing three times for the Republic of Ireland in friendlies.

Kane also had the chance to represent Ireland via his paternal grandparents, but said he never considered anything other than playing for England.

However, he believes no one can blame the West Ham midfielder for his decision.

“I’m sure it was a tough decision,” said Kane.

“He seems like a great lad and enjoying his football and he’s been having a great season.

“I’m sure he took his time and the decision he made is what he thought will be best for his future and nobody can blame him for that.”

Recently, Mauricio Pochettino heaped praise on Kane as the England striker became Tottenham Hotspur’s top scorer in Europe and fired them into the Champions League quarter-finals.

Kane’s second-half goal at Borussia Dortmund on Tuesday put Spurs in the last eight after sealing a 1-0 last-16, return leg win to clinch a 4-0 aggregate victory.

It was Kane’s 24th European goal -- his 14th in the Champions League added to 10 in the Europa League -- to take him past Jermain Defoe’s tally of 23.

“I’m so happy for him, you all know how I feel about him - he’s one of the best strikers in the world,” said Pochettino.

Kane was not the only Spurs player to reach a key milestone at Dortmund as goalkeeper Hugo Lloris kept his 100th clean sheet.

“I want to congratulate Kane and Lloris too, because that was his 100th clean sheet for Tottenham, which is fantastic for him too,” added Pochettino.