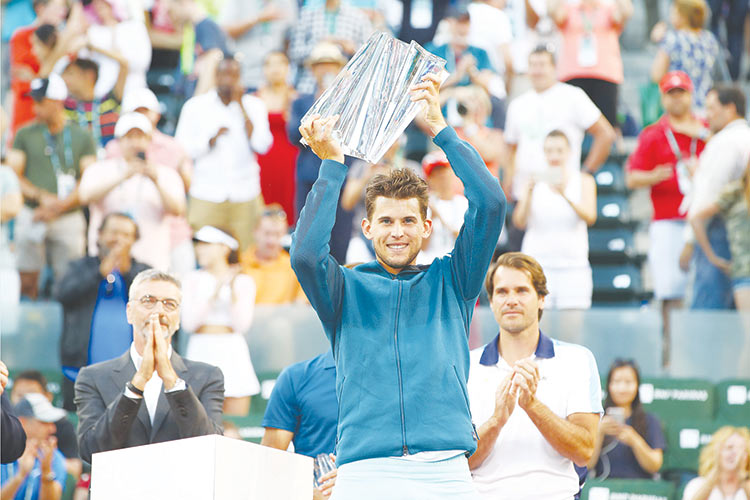 Dominic Thiem celebrates with the trophy after winning the final match at the Indian Wells on Sunday. Agence France-Presse

INDIAN WELLS: Dominic Thiem claimed his first Masters 1000 title after coming from a set down to defeat Roger Federer 3-6 6-3 7-5 at Indian Wells on Sunday.

Momentum swung in Thiem’s favour in the deciding set when he smacked a forehand winner down the line to break Federer and take a 6-5 lead.

The Austrian fell on his back and covered his face with his hands when Federer, who had been bidding for a record sixth Indian Wells title and 101st tournament victory, netted on match point.

The 25-year-old Thiem paid tribute to his opponent.

“It is such a pleasure to compete with you, to learn so much from you, and to play with one of the biggest legends of all time,” he told the 20-times Grand Slam champion during the trophy presentation ceremony. “I feel like it’s not my right to congratulate you, you have 88 more titles than me, so I’m just hoping you play more and we can have some other big finals,” he said with a laugh.

Federer was gracious in defeat after falling in the final in the Southern California desert for a second consecutive year.

“It has been a great week for me even though it didn’t work out today,” he said.

“What a great week for Dominic. Wonderful playing at the very end and throughout the week. You deserve it.”

Federer raced to an early lead, winning the first three games before wrapping up the first set in the Southern California desert.

But baseline specialist Thiem kept his composure and levelled the match in the second, gaining traction by extending rallies and unleashing a torrent of high-kicking serves to keep Federer off balance.

Federer’s own serve lost some of its bite in the crucial game in the third set with the score tied at 5-5.

“The game he broke me I didn’t serve very well, so I think he took advantage of that fact,” said Federer, who was not overly down about the defeat.

“Really there is no reason to get down. Plus there is more to look forward to in Miami.”

Thiem will also play in Miami, hoping to complete the “Sunshine Double” with a victory there after his Indian Wells win.

Andreescu used creative and aggressive shot-making to defeat the German despite suffering with a troublesome right shoulder and leg cramps on a hot and sunny day in the Southern California desert.

The 18-year-old dropped her racket and fell on her back when Kerber hit a backhand into the net on match point to deliver the tournament wildcard the victory.

“It wasn’t an easy match. It was one of the toughest matches I’ve ever played,” she said in an on-court interview. “It’s so incredible.”

Andreescu would love to follow in the footsteps of world number one Naomi Osaka of Japan, who won the tournament last year before claiming the U.S. and Australian Open titles.

“The next is a Grand Slam. Let’s see where this can take me,” said the unseeded teenager.

“Naomi did this last year. Now to have my name in front of so many champions it means the world to me.”

Andreescu played fearlessly at the outset, breaking the former world number one in the opening game of the match and taking the first set.

The eighth seed battled back to claim the second and looked like she would cruise to the finish line when she broke to go up 3-2 in the third after Andreescu needed a medical time out to have her heavily taped right shoulder worked on by a trainer. Momentum swung in Andreescu’s direction when she broke back to level the set at 3-3 and held serve to love in the next game.

Nerves appeared to get to Andreescu near the end, when Kerber saved three match points behind some stout defence.