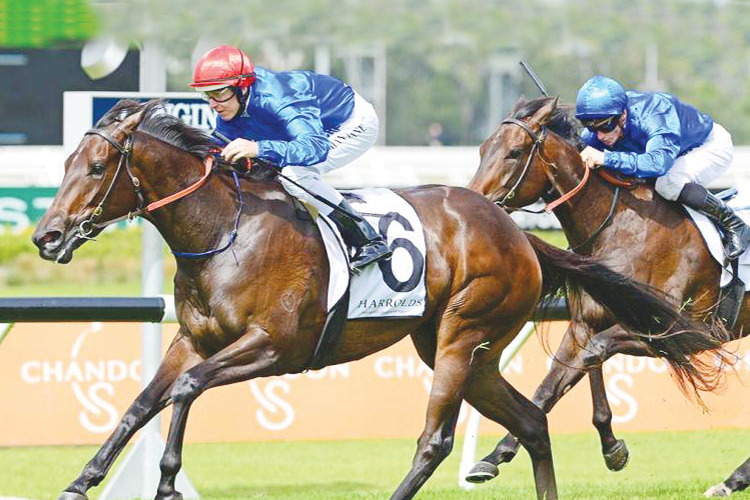 The two Andre Fabre-trained horses were among the nine runners in the 10-furlong race on heavy ground.

Soleil Marin, who finished last of seven in the Prix Exbury last year in a snow storm, broke well and raced in fifth under Pierre-Charles Boudot. The five-year-old son of Kendargent improved to fourth after half-way and followed Magny Cours in challenging in the straight.

He was settled in seventh before switching out wide turning for home and challenging in the straight. Magny Cours came through to lead over a furlong out, but was not able to hold the strong surge of Soleil Marin who went to the front in the closing stages and won going away by a length and a quarter in 2m 17.29s. The third, Air Pilot, finished three lengths behind Magny Cours.

This was Soleil Marin’s sixth victory and Godolphin’s Lisa-Jane Graffard reported, “It is fantastic to win the first Group race of the year in France.

“Soleil Marin finished tailed off in this race last year when it was snowing heavily and it looks like he is coming back to his best now which is great.

“I think this was a career-best performance by him – he had a really good comeback race on the all-weather at Chantilly. He dug deep today.

“We will now discuss where to go next – there is the option of the Prix d’Harcourt (G2, 10f Longchamp, April 7), which is the next logical step, but we will see how he comes out of the race.

“He is a horse who really likes cut in the ground and he also acts very well on the all-weather.

“Magny Cours is a horse we have always thought a lot of and Mickael commented that he probably did not quite stay today. He also lacks a bit of experience as well.”

Meanwhile, A new member joined Godolphin’s growing band of Australian two-year-old winners in Melbourne on Saturday,  and an old one moved up a peg or two in Sydney.

On a day when the local stable finished second and third in the inaugural $5 million All-Star Mile with Hartnell and Alizee at Flemington, it was the juveniles who again starred.

First to strike was Flit who dead-heated with Ready Set Sail to win the G3 Thoroughbred Breeders Stakes at Flemington, while Kaimichi led throughout to win the G3 Magic Night Stakes at Rosehill.

Having only her second start Flit, a daughter of Medaglia d’Oro, turned in an encouraging effort to hang on to a share of the victory after seemingly certain to be beaten.

Trainer James Cummings said Flit would be entered for the second and third legs of the Sydney two-year-old Triple Crown, the G1 Sires Produce Stakes and the G1 Champagne Stakes.

“She’s in some of the Sydney features but we’ll give her a few days down here in Melbourne to wind down after today’s effort,” Cummngs said.

In Sydney, Kiamichi put herself into the mix for a start in next Saturday’s $3.5 million G1 Golden Slipper with her strong win on a heavy track at Rosehill.

Kiamichi was the first two-year-old from the Cummings team to win this season, and on Saturday she won her second and the stables 20th juvenile race for 2018-19.

The win qualified her for the Golden Slipper, it only remains for Cummings to decide if she will join up to four others from his stable in the race.

“It’s just a dream to have so many nice colts and lovely fillies to be presented on Golden Slipper day,” Beadman said.

“It was a very, very positive win the way she did it at both ends.”

“She ticked another box, she can handle the ground, so it’s a wonderful position to be in to have the selection of horses that we have.”

Back at Flemington, Hartnell ran competitively in the ungraded, but high-stakes All-Star Mile, only to go down by 1-1/4 lengths to the Tasmanian filly Mystic Journey.

A nose behind Godolphin’s old warrior was stablemate Alizee who looked the winner when she loomed at the 200m.

Both will continue their campaigns in Sydney over the next month.