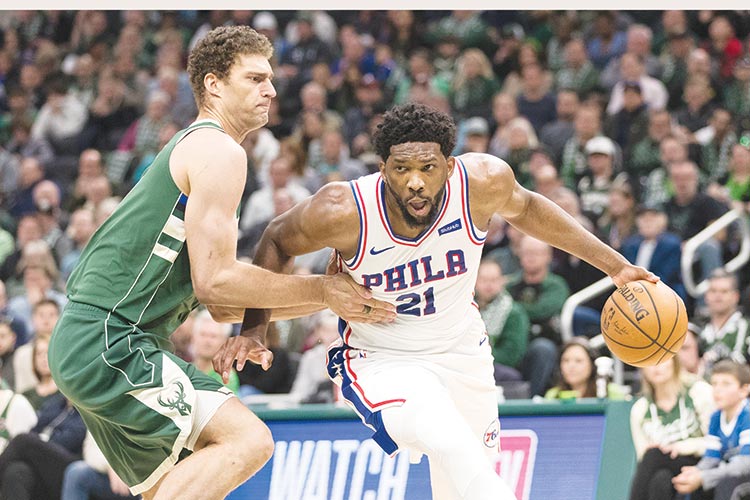 Philadelphia 76ers’ Joel Embiid (21) drives for the basket against Milwaukee Bucks’ Brook Lopez (11) during their NBA game on Sunday. Reuters

It was Embiid’s 52nd career double-double and the 25th time he has scored at least 30 points and seized 10 rebounds in a NBA game.

Embiid’s best quarter was the fourth when he tallied 18 points as the visiting Sixers earned a spot in the Eastern Conference playoffs by beating the top-ranked team in front of a crowd of 17,300 at the Fiserv Forum.

“They are the best team in the NBA right now, as far as record goes,” Embiid said.

“No. 1 in our conference. I felt like we had to make a statement. We had to get this win.

Jimmy Butler had 27 points and JJ Redick 19 for the Sixers, who won their fourth in a row.

Antetokounmpo carried the Bucks on his back with one of the best games of his career. He also had 16 rebounds and seven assists, and Khris Middleton added 19 points. The Bucks played without guard Malcolm Brogdon, who will be sidelined for at least six weeks with a plantar fascia tear in right foot.

Embiid made two free throws in the final seconds of the fourth to help seal the win.

Elsewhere, LeBron James scored 33 points but it was not enough to prevent the Los Angeles Lakers sliding to an embarrassing 124-123 defeat to the league-worst New York Knicks.

The Lakers, who are all but out of contention for the playoffs, blew a 122-111 lead late in the fourth quarter as the Knicks ended a run of eight consecutive defeats with an upset win at Madison Square Garden.

It marked another grim milestone in the Lakers’ rocky season, which has nosedived dramatically since the turn of the year.

The Knicks are rooted to the bottom of the Eastern Conference with the worst record in the NBA, with Sunday’s win seeing them improve to 14 wins against 56 defeats.

The Lakers meanwhile are stuck in 11th spot in the Western Conference with 31 wins and 39 defeats, nine wins fewer than the Los Angeles Clippers, who occupy the last remaining playoff berth.

Also, Nikola Vucevic had 27 points and 20 rebounds to lead the Orlando Magic to a 101-91 win over the Atlanta Hawks.