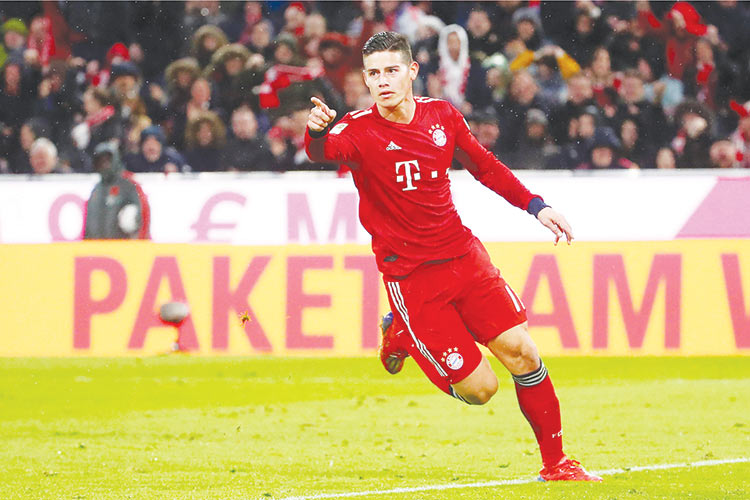 Bayern Munich’s James Rodriguez exults after their victory against Mainz during a German League match on Sunday. Reuters

Berlin: Bayern Munich took out their Champions League frustrations on Mainz as James Rodriguez claimed his first Bundesliga hat-trick on Sunday in a 6-0 romp to fire the Bavarians back to the top of the table.

After Wednesday’s Champions League exit, following a 3-1 home defeat by Liverpool in the last 16, Mainz bore the brunt of the backlash at Munich’s Allianz Arena.

Rodriguez, on loan until the end of the season from Real Madrid, came off to a standing ovation with 20 minutes left after arguably his best display in the famous red shirt.

Canadian wunderkind Alphonso Davies, 18, scored his first Bayern goal on only his fifth appearance after coming off the bench.

The thumping win saw Bayern reclaim top spot in the Bundesliga from Borussia Dortmund, who briefly usurped them with a nervy 3-2 win at Hertha Berlin on Saturday, with eight games left.

Dortmund and Bayern are level on 60 points, but the Bavarians hold a superior goal difference of seven.

Leon Goretzka laid on the second goal, chesting down into Rodriguez’s path and the Colombian opened his account on 33 minutes.

French winger Kingsley Coman gave Mainz goalkeeper Florian Mueller no chance with his shot six minutes before the break to make it 3-0 at half-time. Rodriguez wrapped up his hat-trick with two goals in four breathtaking minutes.

Bayern have now won 13 of their last 14 league matches.

Earlier, fifth-placed Eintracht Frankfurt, the only Bundesliga club left in European football, maintained their challenge for a Champions League spot with a 1-0 win at home to bottom side Nuremberg.

A first-half goal by Austrian defender Martin Hinteregger leaves Frankfurt unbeaten in their last 13 games, including nine in the Bundesliga.