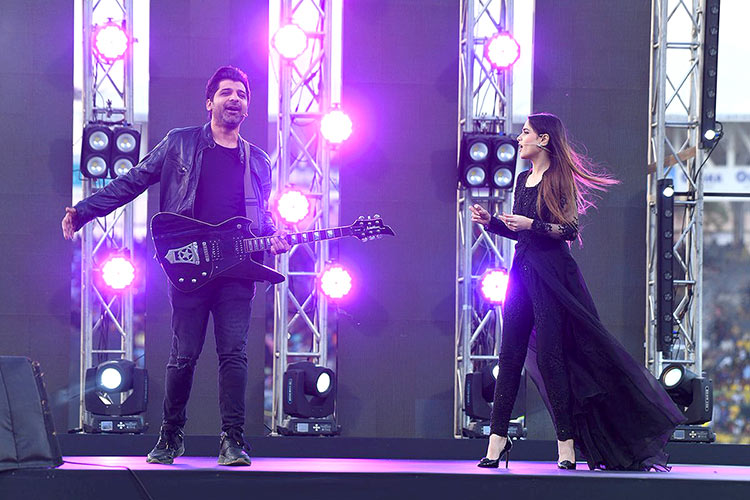 KARACHI: All future Pakistan Super League (PSL) matches could be played on home soil after the last eight games of the 2019 tournament went off without a hitch in Karachi, boosting hopes of attracting more international teams, said the country's cricket chief at Sunday's final.

Quetta Gladiators beat former champions Peshawar Zalmi by eight wickets on Sunday to lift their maiden PSL title in a pulsating atmosphere created by a capacity crowd of 32,000 fans at the National stadium.

"Today is a historic day," said Pakistan Cricket Board (PCB) chairman Ehsan Mani at the closing ceremony on Sunday. 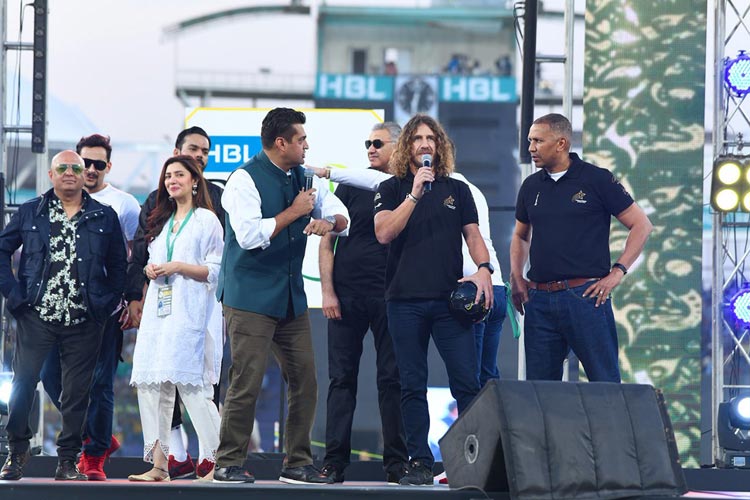 Pakistani actors perform at the closing ceremony of PSL at National Cricket Stadium in Karachi on Sunday. Twitter photo

"Around 230,000 people have watched matches in Karachi which indicates that Pakistan is a safe country and we are gradually returning to normal as far as hosting cricket is concerned."

Sri Lanka are in discussions about playing two Tests in Pakistan in October and talks are also taking place with Bangladesh about a tour in early 2020.

"I thank all the foreign players who came here and I hope to see them here for all the PSL matches next year," said Mani. 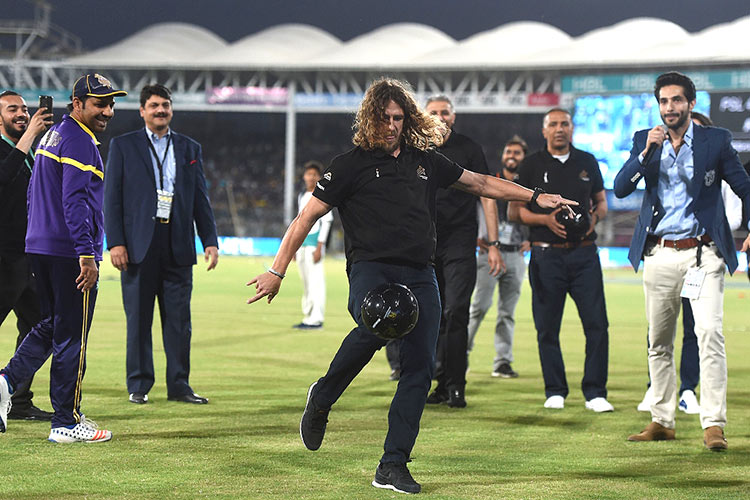 Peshawar were restricted to 138 for eight in their 20 overs. Umar Amin top scored with 38, while rookie 18-year-old quick bowler Mohammad Husnain finished with three for 30.

Quetta raced to victory with eight wickets and 13 balls to spare as former Pakistan opener Ahmed Shehzad (57) and Rilee (38) put on an unbroken 73-run stand to see the Gladiators home at 139 for two.

The first 26 round-robin matches were held in the United Arab Emirates, which has been Pakistan's neutral venue since a deadly attack on the Sri Lankan team bus in Lahore 10 years ago.

"I thank the people for coming in big numbers," Pakistan and Quetta captain Sarfraz Ahmed told the crowds at the pre-match toss.

"We have sent a clear message that Pakistan is passionate about cricket and we are ready to host more cricket." 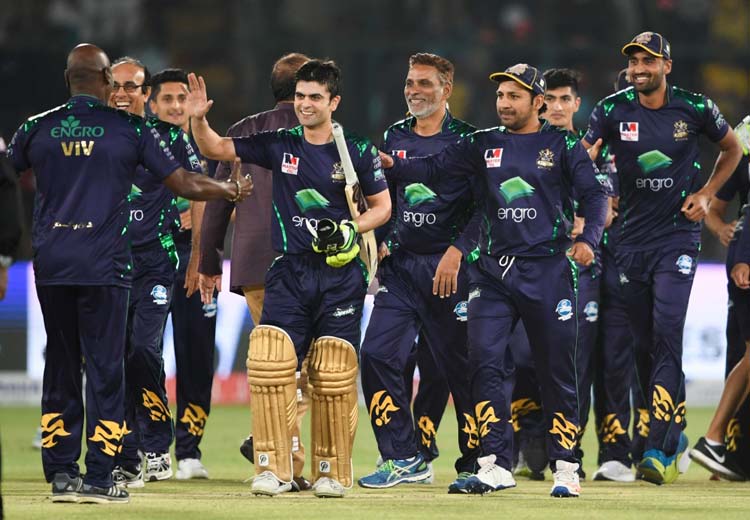 Cricketers of Quetta Gladiators celebrate the victory in the final of Twenty20 Pakistan Super League at the National Cricket Stadium in Karachi on Sunday.  Asif Hassan / AFP

Cricket-starved fans thronged the National Stadium for all eight matches, putting up with tight security checks and long walks after shuttles dropped them a mile (1.6 kilometres) away from the stadium with 13,000 policemen and 2,500 military personnel deployed

"Pakistan is a peaceful country," said one banner in the Imran Khan stand, named after the former World Cup winning skipper and current Pakistan prime minister who last week pledged to hold all PSL matches on home grounds next year. 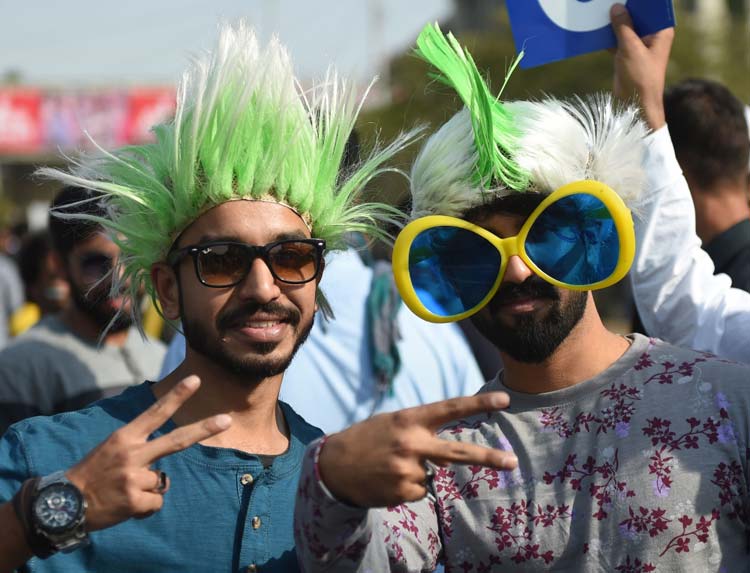 Cricket fans pose for photographs before the start of the final Twenty20 Pakistan Super League at the National Cricket Stadium in Karachi on Sunday. Rizwan Tabassum / AFP

Watson said he had enjoyed playing for the first time in Pakistan, a country where Australia have not toured since 1998 over security fears.

"It's incredibly special to be able to play in front of incredible atmosphere and fans," said Watson.

"I have never played in such an atmosphere," said Sammy, who led West Indies to two World Twenty20 titles in 2012 and 2016. "This proves that Pakistan is ready for more cricket." 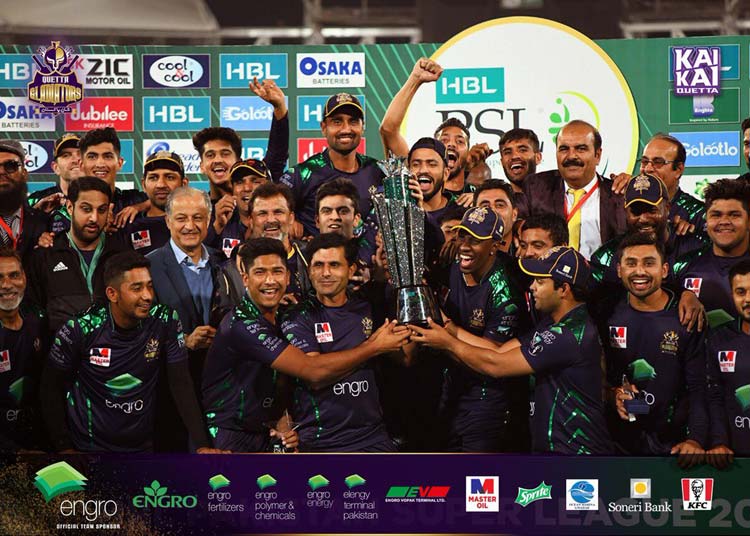 Cricketers of Quetta Gladiators celebrates their victory in the final of Twenty20 Pakistan Super League(cricket match at the National Cricket Stadium in Karachi on Sunday. Twitter photo